First responders are asked to present proper identification at the ticket windows upon arrival to the track Saturday to receive their admission ticket.

Saturday’s schedule will see the return of the ARCA DTS Drive Train Specialists Street Stocks to action. The division has had several weeks off due to weather and scheduled off-nights. Greg Studt and Ian Jezylo (A and B Main, respectively) lead the point standings for the Street Stocks going into Saturday’s contest. 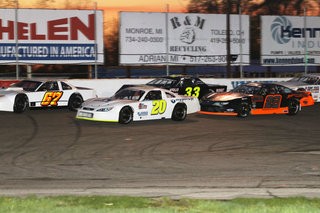 The Vault Antiques and Treasures 250 lap ARCA Enduro race is also on the slate, which is race number 2 of the 4-race series. Royal Oak, MI driver Robb Remick took the win in the May 18 event. 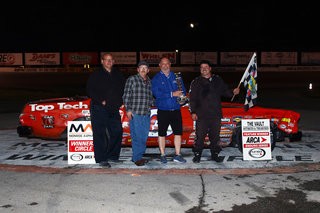 A special race for the night has the MCR Dwarf Cars making their annual visit to “The Rock” this Saturday for the Steve Martin Memorial. Steve was one of the original drivers and founders of the Dwarf Car tour in the area and ran the group until his passing last year. In honor of Martin, the feature race will be 26 laps. The Dwarf cars are equipped with motorcycle engines and are scale models of the early coupes. 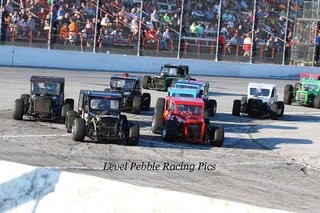 The pit gates will open at 3:30. All tickets will go on sale at 5 p.m. when the box office opens. Practice also begins at 5, qualifying at 6 and show time is 7 p.m. Parking is free on the track grounds. No coolers or outside beverages are permitted.

A slight schedule change has been made for the July 6 event at Flat Rock. The event will now be titled the Firecracker 150 and Monroe Superstore Fireworks Night. The feature race only format for this night has the ARCA Moran Chevrolet Late Models battling in a 50 lap race. The ARCA DTS Drive Train Specialists will run 50 and 20 laps for the A and B Mains, respectively, and the ARCA Victory Lane Quick Oil Change Figure 8’s will go 30 laps in the Michigan Figure 8 Championship.  The Bandoleros will also hit the track July 6.

The night concludes with the famous and fabulous Flat Rock Fireworks show, which began in 1981 and continues to this day!