Flat Rock, MI—June 22, 2019:  It doesn’t happen very often in auto racing, but Brian Bergakker made history Saturday night at Flat Rock Speedway.  The Middeville, MI driver won both 100 lap Late Model feature events, winning the Ross Mortgage Level Pebble 200 on a beautiful evening.  Brian captured the ARCA/CRA Super Series powered by Jeg’s stock-bodied feature, then jumped into his outlaw-bodied racer and zipped to victory in the ARCA Late Model Gold Cup 100 lap contest.  Just 1 yellow flag was displayed in each race, allowing both races to finish in under 30 minutes.  Bergakker and the crew are now very familiar with the Monroe Asphalt Winner’s Circle, where Tim Ross, President of Ross Mortgage, presented the trophies to Brian.

Begakker took the lead on lap 32 of the ARCA/CRA 100 lap feature, using the high groove, as he powered owner Bryan Clay’s yellow number 30 to the win. Once out front, Bergakker pushed his lead to about 3 seconds as he claimed his first-ever CRA win.  Kyle Crump got by Austin Kunert in the late stages to take second, Kunert was third, Johnny VanDoorn fourth and Michael Simko fifth.  Fast Qualifier Brian Campbell (12:185), Evan Shotko, Hunter Jack, Josh Brock and Harold Fair Jr. completed the top ten finishers in the 20 car field. 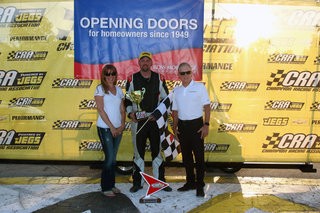 After the crews switched out in the infield pit road, Bergakker and several other drivers pulling double duty got about a 20 minute rest before the green flag flew for the ARCA Late Model Gold Cup Series/ARCA Moran Chevrolet Late Model 100 lap main event, which is race number 2 of the Series. Former track champion Eric Lee set the pace at the green flag and ran strong out front, with Steve Needles and Bergakker in tow.  Brian got by Needles for second, and took the lead on a 3-wide move going down the front-stretch on lap 46.  From there, it was all Bergakker as the green flag stayed out, allowing Brian to build a cushion over Needles.  Lapped traffic stayed in effect the entire distance for the 19 car field, but had no effect on Bergakker as he grabbed win number 2 on the night, and, his 3rd career win in the outlaw Late Models at Flat Rock.

A great side by side battle between Dennis Whisman and Jeremy Vanderhoof for several laps highlighted the ARCA Victory Lane Quick Oil Change 20 lap Figure 8 feature to end the evening. Vanderhoof was able to nose into the lead after the dicing back and forth to take the win.  Greg Studt came on strong in the final laps to get by Whisman for second, Whisman was third, Ethen Lambert fourth and James Vanderhoof fifth, followed by Dave Lambert, Dennis Whisman Jr., Stephanie Bradley, Travis Earley and Jacob Lee.  The original start ended up going to a red flag when the field tried to go 4 wide, resulting in a blocked track.  The incident ended the night for Earley and Lee.  Ethen Lambert and Lee took the heat wins.  Vanderhoof posted fast time at 20:693. 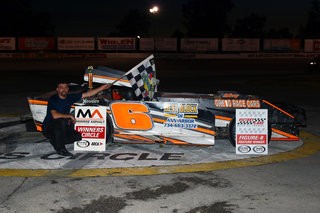 Saturday, June 29 Flat Rock Speedway will host Jet's Pizza/Whelen First Responders Night. All police, fire and emergency personnel will be admitted free to the races with proper ID.  The ARCA DTS Drive Train Specialists Street Stocks return to action, the Vault Anqtiques and Treaures 250 lap Enduro race and the MCR Dwarf Cars will be on hand for the Steve Martin Memorial.