It will be a weekend of firsts at Flat Rock Speedway this Saturday and Sunday, June 15-16. The Vore’s Compact Touring Series, featuring front-wheel drive cars, will make their first-ever appearance at the track Saturday night. And, for a guy that’s run and won in NASCAR, and has also raced Indy Cars, Sprints, Midgets, Modifieds, dirt, pavement, indoors, outdoors and all types of Stock Cars, Ken Schrader will take the wheel of a front-wheel drive machine for the very first time Saturday night!

The Saturday night show begins a rare double-header weekend at Flat Rock this Saturday and Sunday. Saturday’s action, in addition to the Vore’s Series, will see the Victory Lane Quick Oil Change Michigan Figure 8 championship, as the ARCA Figure 8 division goes 40 laps on the Figure 8 course. The ARCA DTS Drive Train Specialists Street Stocks will also be in action.

Schrader, a native of Fenton, MO, has competed at Flat Rock in the ARCA Menards Series Stock Cars in the past. But, the Saturday contest in the Vore’s Compact Series is also a first for the very popular driver, who has a great legion of fans in the Michigan-Ohio area.

A field of 30 cars are entered in the Vore’s Series for Flat Rock’s event. The Tour will also compete at Toledo, OH Speedway the night prior, Friday, June 14. 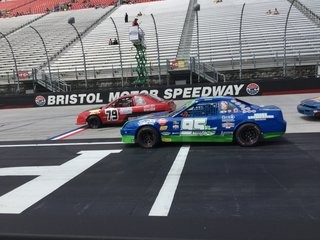 The pit gates open at 3, practice, the front gates and ticket office all have a start time of 4:30 and show time is 7 p.m.

Fans can bring their ticket stubs from the June 8 School Bus race and receive a $5 discount for the Saturday, June 15 show.

To continue a weekend of first-time events, a Father’s Day special event is set for Sunday afternoon, June 16. The Motor City 200 will feature the CRA Jeg’s Late Models in a 100 lap contest, which is their initial appearance at Flat Rock. The ICAR All Star Modified Series will also hit the track for a 75 lap contest, which last competed at Flat Rock nearly 10 years ago. The MCR Dwarf Cars will go 25 laps. Sunday’s event is being promoted by Motor City Racing Promotions. The pits open at 10, practice begins at Noon, the front gates and ticket office will also open at noon, time trials are at 2 and racing at 3 p.m. This event was postponed by rain back on April 28.

For the complete time schedule and additional information, check out the next race box on Flat Rock’s home page at www.flatrockspeedway.com.

In our society, ethics have great importance. And as per the term paper writing service you can never learn ethics without education. So it is necessary for every man and woman to get educated. If we want to make our country stand out, then we have to get educated.