4 different drivers took turns leading the 250 lap finale’. Matt Ringger took the point at the start and held the lead for 7 laps until Kyle Metdepenningen took control on lap 8. Kyle stayed in the number 1 spot, but point leader Rick Bennett slipped in and out of lapped traffic and grabbed the lead on lap 15. Rick, up by 5 points on both Robb Remick and Derrick Sheppard going into Saturday’s action, ran strong in the top spot until lap 41, when he got tangled up with a lapped car, sending Rick to the pits for service. Stadniczuk, the fast qualifier at 14:036 for the 21 car field, was right on the bumper of Bennett and now assumed control of the race.

The 17 year-old Temperance, MI driver was smooth behind the wheel, encountering lapped traffic for pretty much the entire race. Ethan kept up a solid advantage as he steered his way to his 2nd Enduro win of the year. Sheppard’s second place run gave him the 2018 Monroe News Enduro title, his first-ever championship. Third was Ed Case, fourth went to Frank Trupiano and fifth was Kyle Metdepenningen. Robb Remick, Troy Brehmer, Jacob Thomas, rookie Kenyon Knight and Ringger completed the top ten finishers.

Mason Surgener and Evan Varney staged a race in their Bandolero cars prior to the Enduro, with Surgener taking the win. The track will again schedule this class in 2019, which has purpose built race cars for ages 8-14. Flat Rock Speedway will continue to work in building this class for future seasons. 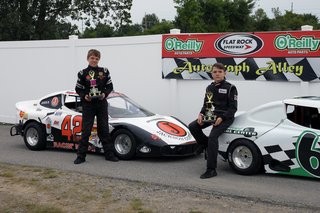 While racing takes the final checkered flag of 2018 at Flat Rock, the next event at the track is the hugely popular Flat Rock Historical Society Flea Market, set for Sunday, October 7. Admission to the grounds is free. Vendor space is $40 for a 20’ x 20’ section, and is on a first-come, first-serve basis. No tables are furnished. Set-up for vendors begins at Midnight, with the gates open to the public from 7 a.m.to 4 p.m. No pets are allowed.