The 35 lap A Main championship feature saw Dan Ford Jr. lead every lap, but he had plenty of company with Guy Fire right on his back bumper. Scott Selmi was on the move throughout the contest, using the high groove as he moved into the top 5 by lap 20. Scott stayed on the throttle and got door to door with Fire, but he slid back just a bit as the laps wound down. Ford Jr. took the checkered flag with Fire second, Greg Studt third, Selmi fourth and Morneau Jr. fifth, followed by David Liaeff, Kyle Worley, Rob Moore Jr., Race Loving and Jeff Metdepenningen. Morneau stayed in contention and his finish netted him the track title for the Windsor, Ontario driver, the first for the young talent. His margin was 10 points over Studt. 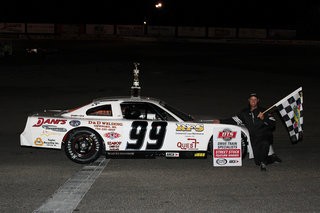 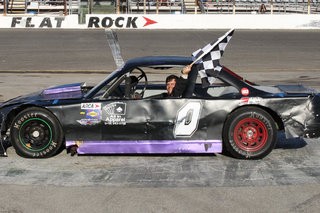 A marathon 25 lap Street Stock B Main saw Ian Jezylo lead each lap as he avoided 6 yellow flags and a red flag when Jerry Farmer slammed the turn 3 wall on lap 12. Jerry was ok but done for the night. Several drivers chased Ian and took turns to battle for the lead. On lap 15, Adam Jezylo and Wilburn Parks, 1-2 in the B points, both dropped out with flat tires. The event finally was completed as Ian took the win over Alan Kennedy, Rich Abel, James Potter, John Smolinski, Chris Diovardi, Leroy Farmer, Kenny Farmer, Trevor Farmer and Parks. Adam edged out Parks by 10 points to win his first-ever title. Morneau Jr. set the Fastime Racing Engines and Parts quick time for the 30 car field at 13:586. Potter led the B cars at 14:031. Heat wins went to Moore Jr., Steve Searles, Clyde McKee, Kennedy and Trevor Farmer. 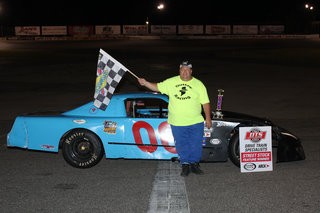 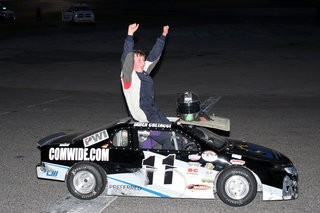 The TKC Go-Kart Club staged a pair of exhibition races for the crowd.

Saturday, September 2 is the date for the Dani’s Transport School Bus Figure 8 Race! A special start time of 6 p.m. is set for this event. The show will also include the ARCA Victory Lane Quick Oil Change Figure 8’s and the DTS Drive Train Specialists Street Stocks, both non-point events. A flag pole race and a Boat Figure 8 race are also on tap.

Tickets, both general admission and reserved, are on sale at the track or by calling 734-782-2480. There is no on-line sale. The advance sale ENDS Friday, September 1 at 5 p.m. No phone orders will be taken after 5 p.m. Friday.

When sat night gets rained out  , why not run on sun