While Thiel’s win may not be classified as an upset by some, it was in terms of beating a strong, strong field of drivers that have won outlaw-bodied Late Model races across the Midwest. Jimmy’s career started at Flat Rock as a teenager and the family-oriented team has stayed close to home for much of that time. Thiel was in contention to win the 2016 version of the 150, but Saturday night was all about Thiel and his #09 machine.

The night started with pole qualifying, worth $433, courtesy of Diamond Racing Products and Moran Chevy. That went to Angola, IN driver Craig Everage, who clicked off a lap at 11:609, just edging out first-time Flat Rock visitor Tyler Roahrig, who clocked in at 11:633. Tyler has won 16 events in the past year and a half and took a liking to Flat Rock immediately, but it was not to be his night at “The Rock”. On the down side, defending Gold Cup champ Steve Needles encountered engine problems in practice and was done for the evening. Everage drew a 14 for the inversion for the longest race of the season at the track.

A 15 lap B Main for the non-qualifiers went to Sparta, MI driver Brian Maxim in his first trip to Flat Rock. Tom Cronenwett, Jimmie Ward Jr. and Kevin Stahl Jr. trailed the winner. Tadek Stadniczuk and Chris Benson were non-starters. 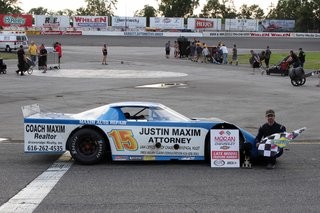 The inversion put Justin Claucherty and Dennis Strickland on the front row for the 150. Strickland led lap 1, with Claucherty taking the top spot on lap 2. Justin stayed out front through lap 28, when the first yellow flag flew as Terry Senneker and Scott Pemberton tangled. Roahrig, who had moved up several spots in the early going, was up on the high side and got into the turn 2 wall, damaging the right front and ending his bid for a Flat Rock win. On the re-start, Frankie Jiovani used the 2nd groove to get by Claucherty on lap 30. Justin, however, came right back on the inside lane and again took the lead on lap 33. Thiel followed in Justin’s tracks and took second spot as that duo pulled away from a pack of strong cars dicing for position, with many saving their tires as the laps clicked off.

At lap 50, the top 5 were Claucherty, Thiel, Jiovani, Strickland and Steve Dorer. At the lap 55 mark, Thiel darted under Claucherty to take the lead. The #09 set a fast pace, as only a handful of yellows slowed the action throughout the 150 laps. There was not much change in the top 5 at the half-way mark for the top 3, but Dorer had moved to fourth and current Flat Rock point leader Justin Schroeder entered the top 5 for the first time in the night. The yellow flag flew on lap 79 as Senneker and Brian Bergakker tangled, giving several drivers the chance to pit for service. 3rd place man Jiovani’s engine began to sputter, while Jeff Ganus, who also had begun to move up through the pack, also pitted.

At the lap 80 mark, Dorer was up to second as he stayed glued to the bottom of the track in the #98 car. Harold Fair Jr. started 12th and was now on the move. Fair took 3rd on lap 87 and grabbed second on lap 89, using the outside groove much of the time.

Thiel stayed out front as lap 100 went into the books, followed by Fair Jr., Dorer, Schroeder, Claucherty, Andy Bozell, Strickland, Phil Bozell, Pemberton and Everage. Schroeder got by Dorer on the next lap to take third spot and began to close the gap on the lead duo. Thiel’s lead was safe as Fair tried to also reel in the leader. By lap 116, Schroeder was really on the move and had gained a ton of ground, getting to within a car length of Fair when the final yellow of the night waved on lap 134. Thiel, who admitted the yellow made him a bit nervous, knowing both Fair and Schroeder had been on the move and had strong cars was all for naught as Jimmy pulled away once again on the restart and kept a solid margin of victory, touching off a huge celebration in victory lane. At the finish it was Thiel, Fair Jr., Dorer, Schroeder and Scott Pemberton, who had a great run and was battling for third and fourth, but wound up with a sensational fifth place run. Claucherty, Andy Bozell, Everage, Phil Bozell and Brian Bergakker completed the top ten.

Thiel collected a total of $3533 for his efforts (The $33 amount for each spot is in memory of Yee’s famed car number 33). The top 5 received bonus money from Dented Fender Racing, with $400, $200, $200, $100 and $100 respectively, added to their winnings. Thiel and Pemberton also collected $100 product certificates from Penske Shocks. Ganus was the winner of a random draw for 4 tires, courtesy of Moran Chevrolet. Fair Jr. took the $50 Moran Chevy Most Improved position bonus. Lap money of $5 per lap went to the leader of each lap for the 150 and the B Main.

The evening was capped off with the 20 lap feature for the ARCA Victory Lane Quick Oil Change Figure 8 division. Scott Apperson backed up his first-ever win several weeks ago by notching win number 2 at Flat Rock that saw a wild wreck as the checkered flag flew. Gary Cronenwett, running second and on the bumper of Apperson, spun by himself as he entered the intersection headed for the checkered flag. Gary kicked up some dirt as he slid off the track, as Stephanie Bradley was racing on the other straight and could not see Gary in time to avoid the wreck. Stephanie’s car slammed into the #05, sending her #34 machine on top of the Cronenwett car. Both drivers were checked out and got out of their cars on their own power. 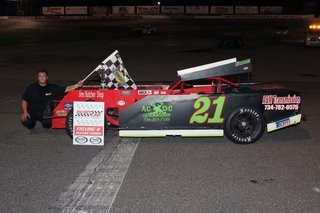