A great 250 lap battle for The Vault ARCA Enduro Series saw Ed Case hold on for the victory, while Derrick Sheppard’s 3rd place run netted him the 4-race Series title.

Chris Benson grabbed the lead at the start of the 50 lap ARCA Moran Chevrolet Outlaw Super Late Model Championship, building up a solid lead as the race went all-green flag.  Lee, starting from the 4th slot, bided his time and jumped to the outside groove around lap 20, setting his sights on Benson.  Eric motored by on lap 33 and sailed to win #6 of the season and his 6th   track championship.  Benson slowed with a tire going down and his night ended on lap 38.  Dennis Strickland was second, Conner Zbozien third, Paul Pelletier fourth and Hayden Sprague fifth.  Stan Yee Jr.,  Joe Hawes, Steve Hawes, George Rangel, Joshua Spindelman, James Pankow, Benson and Joe Genise completed the finishing order.  Zbozien set quick time at 11:897, with heat wins to Strickland and Steve Hawes. 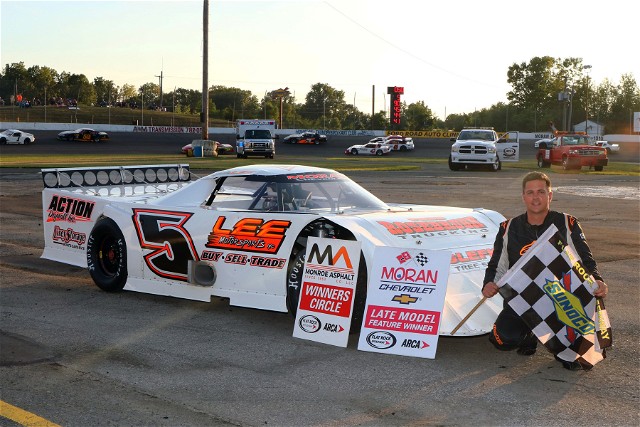 A 20 point margin separated Billy Earley and Dennis Whisman Jr. going into the 25 lap ARCA R & M Recycling Figure 8 Championship event.  Eugene Worden took the lead on the green flag as the battle began for the title. Unfortunately for Whisman Jr., his night ended when his engine went up in smoke on lap 2.  Earley was now in control with the championship clinched, and Billy chased down Worden for the top spot.  Eugene looped his #8 machine while leading on lap 10, Earley zipped by and now Greg Studt applied the pressure to Billy.  That duo got away from the rest of the field.  A great race for third between Scott Apperson (in Steph Bradley’s #34) and Jakob Lee went on for about 8 laps, changing lanes and running door to door.  Lee encountered mechanical issues on lap 19, bringing out the red flag to stop the action and remove Jakob’s #31 after a great run.  Earley took off on the restart and held back Studt for his 3rd win in 2022 and his 6th championship.  Apperson was third, Jeremy Vanderhoof fourth and Travis Earley fifth, followed by Dennis Whisman Sr., Worden, Rich Lee, Jakob Lee, Brice Thomsen and Whisman Jr.   Earley set fast time at 20:689.  Whisman Sr. and Worden took the heat race wins. 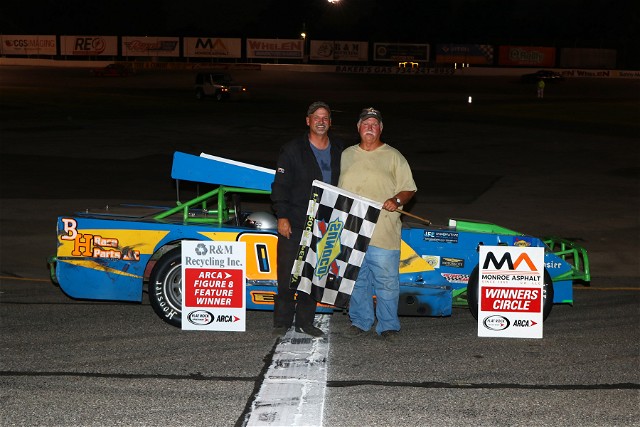 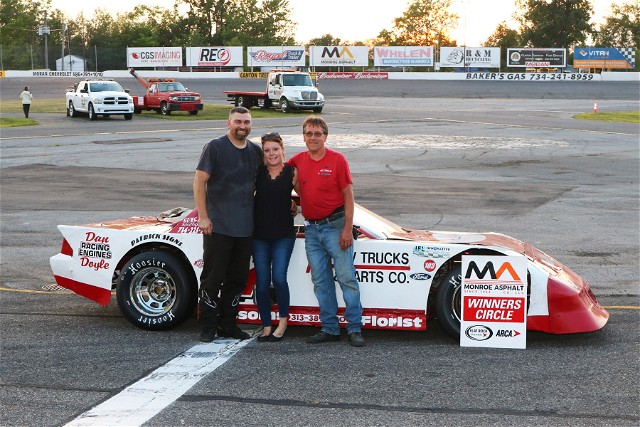 Greg Studt led every lap, held off several different challengers on restarts and took the win in the 30 lap ARCA DTS Drive Train Specialists Street Stock A Main title race.  The 5-car inversion put Studt on the pole.  Greg motored along with the lead, as the very competitive division battled for spots behind the leader.  Greg held on for win number 6 of the season and came up short to 2022 champ Jeremy Vanderhoof, who held a 50 point gap on Greg going into the feature race.  The title is Jeremy’s first in the Street Stock class, to go along with his 2 Figure 8 titles.  Rob Moore Jr. battled hard to notch second spot, Rob Randa was solid race-long for third, Kyle Worley was fourth and Vanderhoof fifth, followed by Doug Litogot, Ron Allen, Landon Schuster, Paul Hahn and Kenyon Knight. 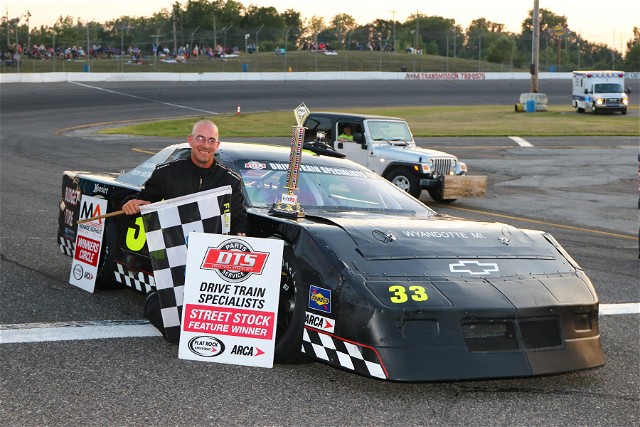 First-time winners are always special, and rookie Jeremy Cronenwett’s win Saturday in the 20 lap B Main Championship was just that.  Jeremy steered his #11 to the victory and the huge Cronenwett clan on hand joined him in the Monroe Asphalt Victory Lane.  Taylor Papineau’s strong run netted him second, 2021 champ Robert Stewart was third, Mark Rangel fourth and Mike Miller fifth, with Ian Jezylo, Rich Abel and Brandon Randa next in line at the stripe.  Miller had clinched the 2022 B Main title prior to the start of the night, as the driver of the #58 celebrated with his family and crew at the conclusion of the race. 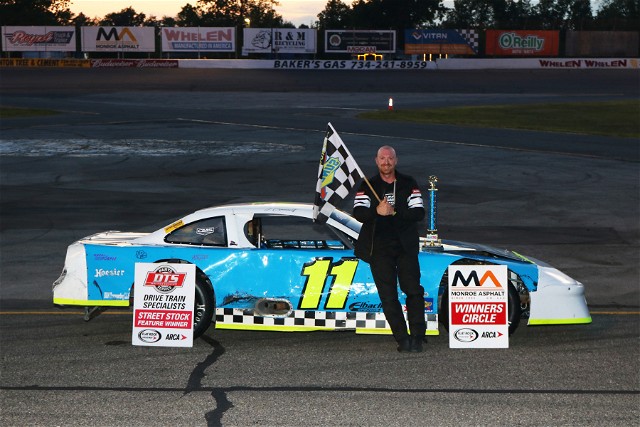 The beautiful evening of weather was topped off with the championship for The Vault Antiques and Treasures 250 lap Enduro Series race number 4 of 4 for 2022.  The event was filled with exciting action, battles for the lead throughout and 16 of the 18 starters finished the event.  Through it all, Ed Case held back Rayce Metdpenningen and Derrick Sheppard to grab the win.  Sheppard’s third place run cemented the championship for Derrick, his second of his career, with the first coming in 2018. 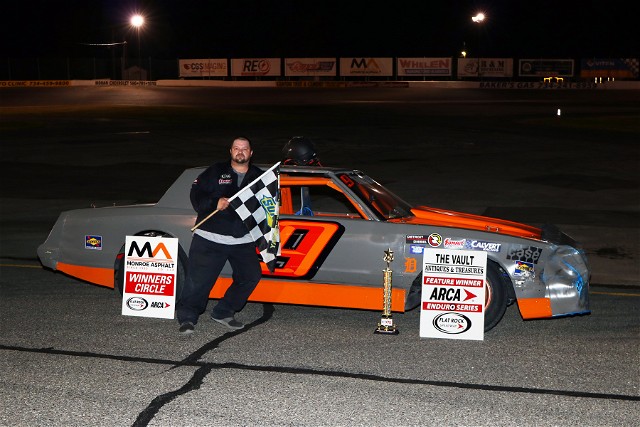 2021 co-champ Nathan Sprotberry took command at the start and ran strong out front, leading the first 115 laps.  The pack narrowed Nathan’s lead and on lap 116, Case made contact with Nathan, sending Sprotberry through the infield grass in turn 2.  Nathan regained control and rejoined the battle.  Case was now the leader and held that spot through lap 146, when Sheppard took the top spot in a great run to the front.  Derrick spun out early in the event, got straightened out, lost a lap, made it up and came all the way back to grab the number 1 spot.  2021 co-champ Kyle Metdepenningen charged through the pack and for much of the 250 laps, the top 4 cars ran within a straightaway of each other.  Both Rayce and Derrick pressured Case the rest of the way, with that trio actually going 3-wide, putting on a great show for the fans! 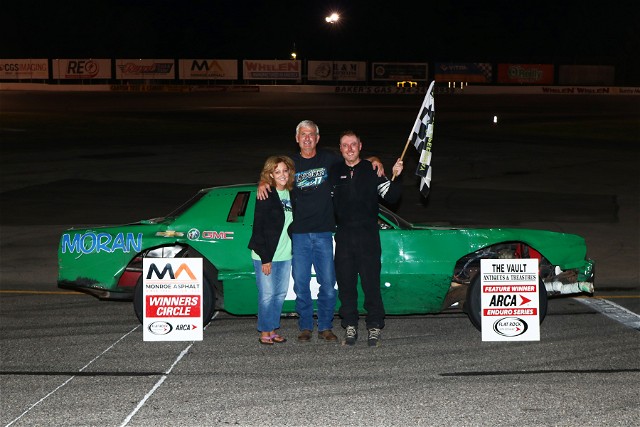 The event has a special start time of 6 p.m.  The front gates, ticket office and will call tent will open at 3:30 p.m. on race day.

Here’s how to order your tickets for this spectacular event, which is expected to be a sellout!

General Admission:  The spectator hill, located in turns 3-4, and the bench seating in the main grandstand is all general admission seating-first come, first-serve.  There are 3 ways to purchase these tickets; in person at the track, calling the track office or online at www.flatrockspeedway.com.    General admission tickets are $20 for adults, kids 6-12 are $5 and under 6 are free.  Add $1 per ticket for online purchases.

The advance ticket sale will end at 4 p.m. Friday, September 2.  Any remaining tickets left will go on sale at the track at 3:30 p.m. race day.  No phone orders or online orders on Saturday, September 3.  A reminder NO coolers, cans or bottles are permitted.

A rain date of Sunday, September 4 at 6 p.m. has been established if needed.

Go to www.flatrockspeedway.com for further updates and information.