Flat Rock, MI—July 10, 2021:  Fireworks in the air, fireworks on the track and racing action filled the night as Flat Rock Speedway held its annual Firecracker 150 and the Monroe Superstore Fireworks display. The features-only format allowed the entire night to be completed before 10 p.m.

A good crowd enjoyed the action and pyrotechnics show to cap off the evening.  Frank Jiovani became the 7th winner in 7 events, taking the victory in the 50 lap ARCA Moran Chevrolet Outlaw Super Late Model feature.  Billy Earley battled for nearly 20 laps with 4 fellow drivers and took the lead just past the half-way mark to win the 30 lap Michigan Figure 8 Championship.

Fourth-generation driver Max Fair won his first-ever ARCA DTS Drive Train Specialists 50 lap Street Stock A Main, while Rob Randa returned to action and held on in a great battle with Taylor Papineau to win the 20 lap B Main.  Rayce Metdepenningen took the lead on lap 11 on his way to the “W” in the 20 lap The Vault ARCA Factory Stock race.

Jiovani got the jump on the start of the 50 lap Moran Chevrolet Outlaw Late Model event, but 2 quick yellows erased his lead.  Things finally calmed down after the rash of yellow flags and Frank rolled into the number 1 spot and held it, with pressure from Steve Cronenwett Jr.  Steve got to the bumper of Jiovani several times and looked to the high side, with Eric Lee, last week’s winner, closing in by using the high lane to move up to the lead duo.  Jiovani stretched the lead just a bit in the closing laps on the way to victory, with Cronenwett second, Lee third, Paul Pelletier fourth and Hayden Sprague fifth.  Sprague picked off 3 spots in the final laps to move into the top five.  Scott Pemberton, Justin Schroeder, Steve Hawes, Austin Thiel and first-time Flat Rock visitor Ray Clay completed the top 10.  Lee set quick time at 11:842.

Despite a short field, 5 drivers put on a back and forth, dicing for position show for the first 20 laps of the 30 lap Michigan Figure 8 Championship for the ARCA Figure 8 division.  Jakob Lee held back Billy Earley and Jeremy Vanderhoof for the first 10 laps, with the trailing duo sliding up and down, back and forth as they tried in vain to get by Lee’s #31.  Dennis Whisman Jr. and Greg Studt joined the wild battle and crept up on the top 3, as each driver looked for a way to get by the other.  Side by side, sometimes 3-wide racing on the Figure 8 track kept things interesting.  Earley finally nosed by Jakob on lap 17 and drove to the win.  Whisman Jr. closed in and moved up to second spot at the finish, Vanderhoof was third, Studt fourth and Lee fifth, followed by Johnny Whisman, Stephanie Bradley, Eugene Worden, Brice Thomsen and Carole Astztalos.  Whisman Jr.’s fast lap of 20:846 led the class in qualifying. 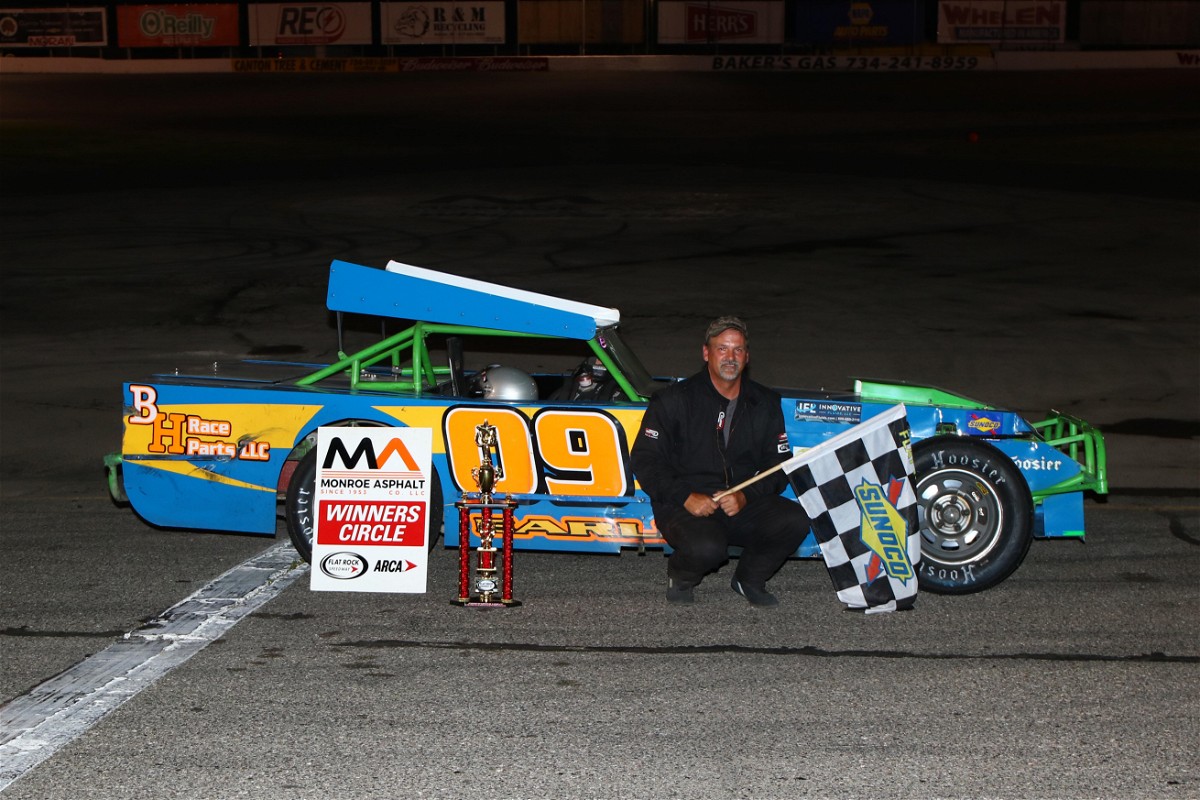 The first 24 laps were all green flag for the 50 lap ARCA DTS Drive Train Specialists Street Stock A Main, with Rob Moore Jr. setting the pace.  Several drivers challenged Rob, but he held strong on the bottom lane.  A lap 24 yellow bunched the field, and things got dicey.  Several yellows were displayed for spins and a tremendously hard hit into the front stretch wall by Rob Moore Sr. brought out the red flag.  The elder Moore quickly jumped out of his car and walked to the pit area.  Max Fair, moving up from his 6th starting spot, immediately went to work and snared the lead on lap 25 on his way to his first Street Stock win at the track.  Moore Jr. took second, Trevor Farmer gained 2 spots in the final laps to take third, Greg Studt was fourth and David Liaeff fifth.  Landon Schuster, Jeff Metdepenningen, Nick Shanks, Johnny Rangel and Clarity Patton were next in line at the finish.  Studt paced the 30 car field in time trials at 13:401. 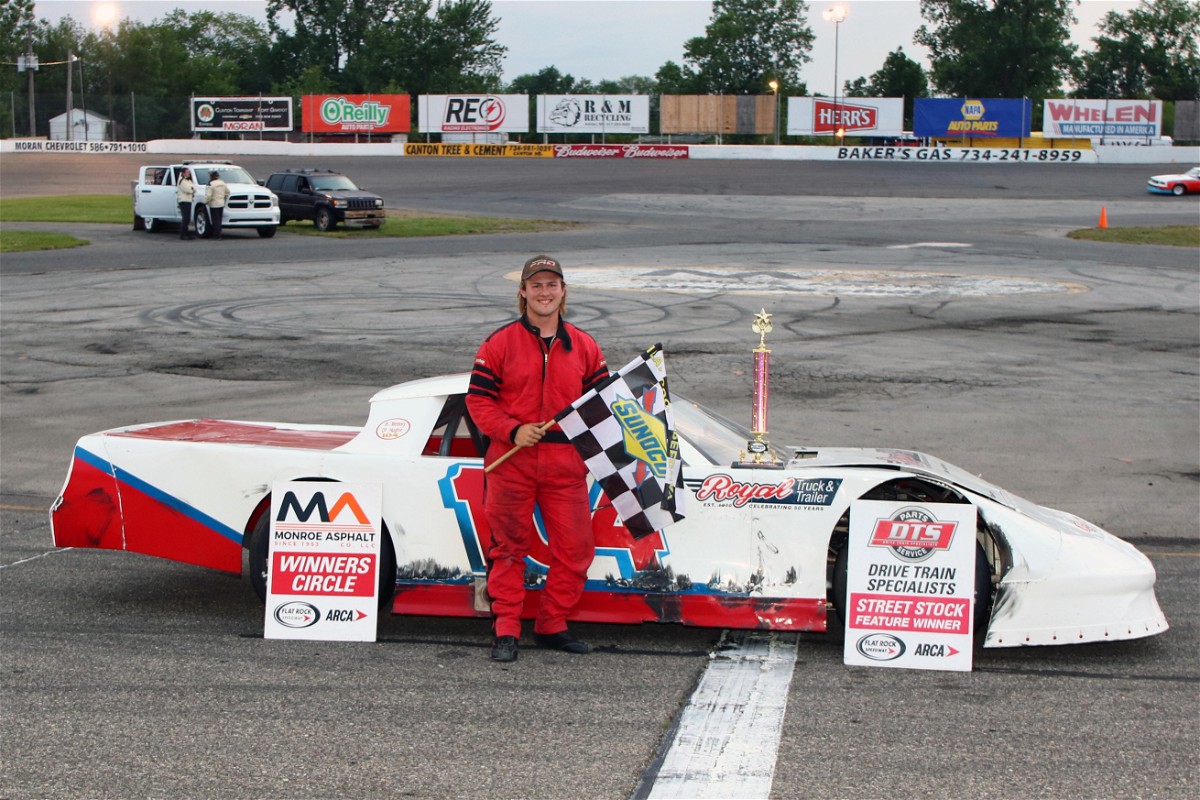 With Rob Randa in the second groove and Taylor Papineau in the low lane, that duo thrilled the crowd to start the action of the night in the 20 lap ARCA DTS Drive Train Specialists Street Stock B Main.  Randa powered his way into the lead by lap 4 and Papineau charged up to battle Rob for the final 5 laps.  On the final turn, Papineau drove deep into turn 4, tagging Randa as they headed for the checkered flag.  Rob got sideways, gathered it in and just nosed out Taylor for the win.  Rich Abel, Robert Stewart, David Hanna, Justin Peterman, Mike Miller, Jesse Carrillo and Aaron Greathouse trailed the first two finishers.  Randa was the fast B Main man at 14:008 in qualifying. 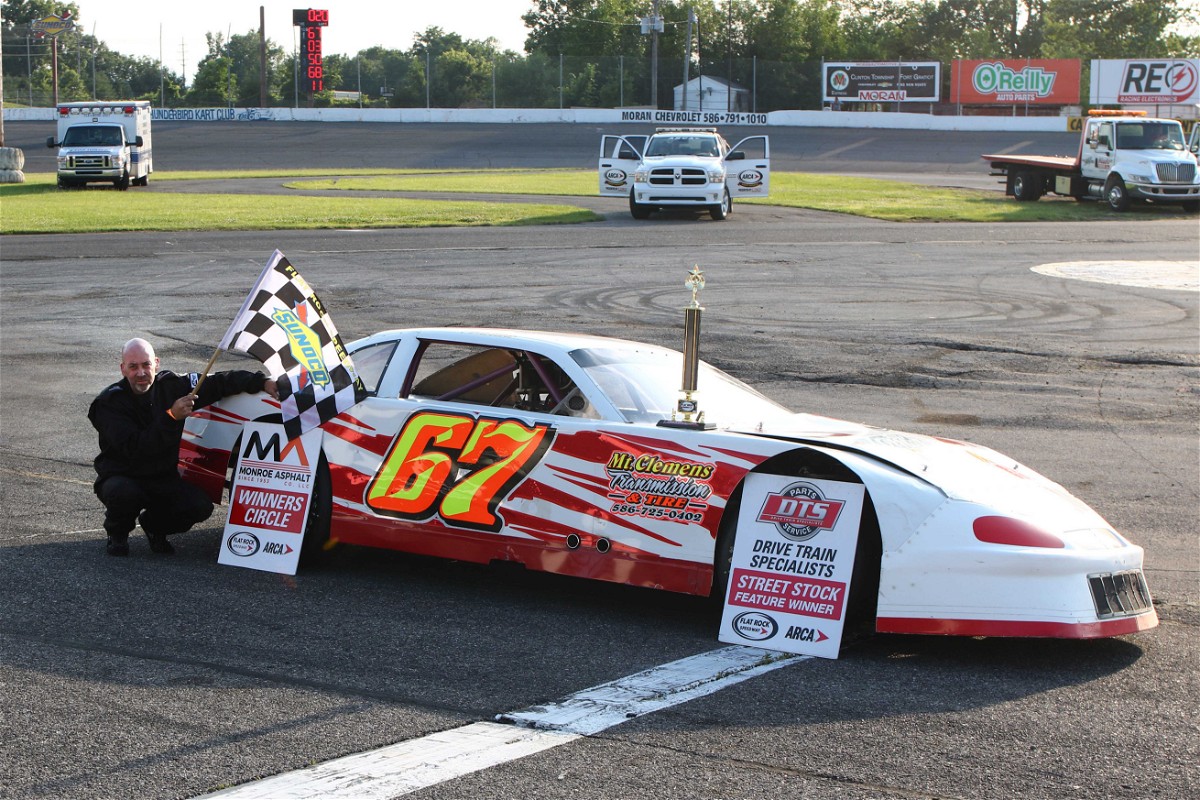 The Vault ARCA Factory Stock 20 lap main went caution free.  A solid 18 car field took the green, with Dale Buttrey grabbing the lead at the start.  Buttrey held the point for 10 laps, with a fast Rayce Metdepenningen flying by on the outside groove on the next lap.  Rayce never looked back as he zipped to the win.  Buttrey held on for second, with plenty of company in the likes of Jeff Metdepenningen in third, Ed Case fourth and Brian Ringger fifth.  Steve Smith, Herbie King, Kenyon Knight, Randy Padgett Jr. and Tom LaFollette completed the top 10.  Jeff Metdepenningen, Rayce’s father, set fast time at 13:860.  Jeff pulled double duty Saturday as did Greg Studt and Mike Miller, running 2 classes. 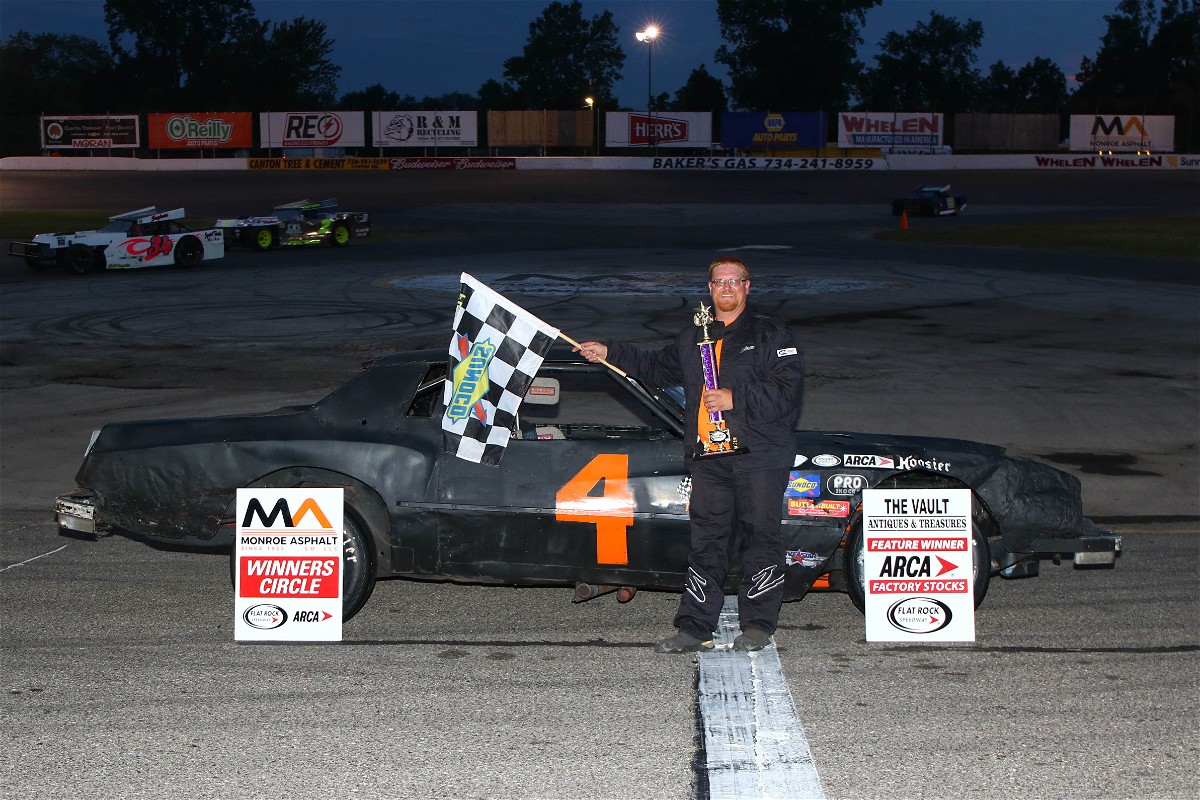 It’s a Friday night special July 16 at Flat Rock Speedway!  (No racing scheduled for Saturday, July 17 only).  It’s Kids Night!  Kids to age 12 are admitted FREE and receive a FREE hot dog and soft drink or water, courtesy of Pepsi and Schwebel Baking Company.  Parents can pick up their kids tickets at the track on race day when purchasing their tickets.

The TKC Go-Karts will kick the night off with an exhibition race at 7:15 p.m.  The ARCA DTS Drive Train Specialists Street Stocks and The Vault ARCA Enduro 250 lap race are on the schedule for this Friday night special.

Just prior to the feature races, a Power Wheels Derby will take place out on the track for kids ages 3-10.  An entry form and Minor’s release must be completed prior to the event.  Parents may hand the forms in at the track on Friday beginning at 6 p.m.  ALL power wheels will be dropped off at the center gate between 6 p.m. and 7 p.m.

Both the entry form and release can be found on the track’s home page at www.flatrockspeedway.com.  Click on the Driver Info. tab and then click on each of the documents.