Rob Moore started things off by rolling his bus on lap 2 of the School Bus contest. The race was stopped, Rob climbed up on top of his bus as the huge crowd roared its approval. The noise was even louder when Moore got back in his bus after it was put back on 4 wheels and he started his ride up and rejoined the action! Terry Smith was next to go over, courtesy of Jack Franzil. Franzil then took his turn going over, with both of those rolls delivering a loud thud. Both climbed out of their rides but were done for the night as their crumpled buses were pushed to the infield grass. AJ Padgett had the lead with 2 laps to go but got into another bus with a loud side hit, stopping his bus for the night. Kyle Worley held out for the win. Padgett, Dennis Whisman Jr., Dennis Whisman, Franzil, Smith and Moore finished in that order.

The ARCA DTS Drive Train Specialists ran a 30 lap feature race and it appeared that Worley was on his way to that victory. Kyle built up a good lead while the pack battled, only to have the advantage go away with a late-race yellow flag. On the re-start, Guy Fire, who started 10th, was now on the outside of Kyle. Kyle’s car did not get up to full speed and Fire pulled away for the win, his first of the season. Scott Selmi was right there to apply the pressure but settled for second spot, third was Worley, fourth went to Rob Moore and fifth was David Liaeff, followed by Rob Moore Jr., Clarity Patton, Kyle Metdepenningen, Steve Chartrand and Paul Duffin. Doug Litogot, Wilburn Parks, Austin Thiel, Brian Kirksey, Rich Abel, Greg Barron, Rob Liedel, Craig Lange, Aaron Greathouse, Joe Rozek and Anthony Camilli were next in line at the finish. Tim Moore was scratched from the race. Heat winners were Worley, Greathouse and Patton. 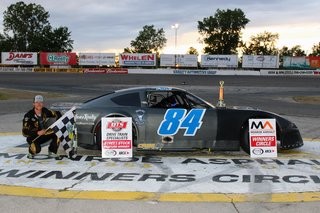 Billy Earley steamed by race leader Greg Studt just past the half-way mark on his way to the checkered flag in the 20 lap ARCA Victory Lane Quick Oil Change Figure 8 feature event. Studt had a sizable lead, but Earley had Dennis Whisman in his tracks and that duo made up ground and closed in on Greg, getting by on lap 11. At the stripe, it was Earley with the win, Whisman second, Studt third, Travis Earley fourth and Ethen Lambert fifth, followed by Dennis Whisman Jr., Dave Lambert, Stephanie Pankow, Chuck Pankow and Jakob Lee. 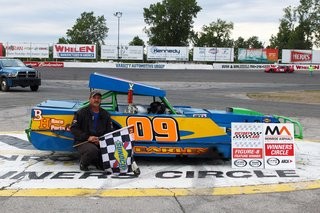 A great battle entertained the crowd as Dave Lambert nosed out Dennis Whisman in the Flag Pole race. The event, which requires the drivers to go around a tire in both the front and back straights to complete a lap, was quite entertaining as that duo traded the lead for several laps. Whisman would zip by on the outside lane as the pair slowed to go around the tire, only to have Lambert dip to the low lane and hug the tire and get by Whisman in the process. Lambert took the win over Whisman, Whisman Jr., Worley, Kevin Stepinski, Stephanie Pankow, Chuck Pankow, Ethen Lambert, Mike Miller and Travis Earley.

Dave Lambert topped the Boat Figure 8 race, which featured several boats flying off their trailers and slamming into the concrete wall! AJ Padgett, Whisman, Travis Earley, Stepinski and Mike Miller were also part of the action. 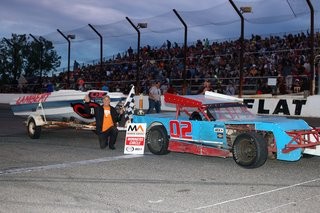 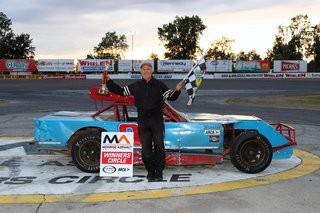 It’s also College ID night at the track! Students can show their college ID’s at the ticket window and will be admitted FREE! Ticket stubs from the August 31 bus race will receive a $5 discount at the track September 7 also.

The pit gates open at 3, the front gates and ticket office open at 4:30 (there is no pre-sale for this event), race car practice/qualifying begins at 4:30 and show time is at 6 p.m. for this event.

A rain date of Sunday afternoon, September 8 at 1 p.m. has been established if needed.