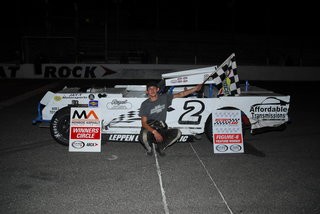 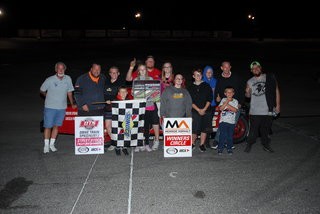 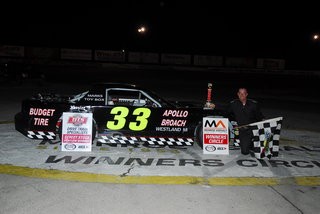 Jiovani’s second place run gave him his first Flat Rock Late Model crown, Studt cemented his title with a win in the Street Stock A Main, Jezylo notched his second B Main title in a row prior to the Saturday event and Whisman Jr. became a first-time champion in the Figure 8 class.

Going into the night, Jiovani and Craig Everage were tied for the point lead in the ARCA Moran Chevrolet Late Model Championship event. Following qualifying and the heat races, Frank had a 10 point edge as the 50 lap feature field took to the track. Hayden Sprague jumped into the lead at the green and set a quick pace, with Eric Lee in pursuit. Jiovani, starting 6th, and Everage, starting 9th, knifed their way up through the pack as the first 43 laps went all green flag. Sprague encountered lapped traffic and got tangled up with Paul Pelletier, bringing out the yellow. Pelletier took responsibility for the incident, giving Sprague his spot back. Lee developed an oil leak and his night ended on the infield after a strong run. 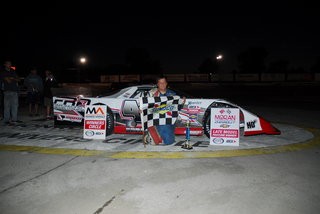 Greg Studt had to take the green flag to notch his second ARCA DTS Drive Train Specialists Street Stock title, but Greg put the exclamation mark on the season by winning the 30 lap A Main feature race. The inversion of 6 put Greg on the outside pole. Studt stayed in command the entire distance despite the challenges of several drivers in the late stages. Rob Randa made a late run to the front to take second, Nick Shanks was third, Jeff Metdepenningen fourth and Scott Selmi fifth, followed by rookie Doug Litogot, Kyle Worley, Caleb Barron, Guy Fire and Steve Chartrand. Claude Plante Jr. of DTS was on hand to congratulate Greg on his title.

Ian Jezylo had already secured the DTS Drive Train Specialists Street Stock B Main crown, his second in a row. Ian took the lead at the green and ran strong out front with the lead in the 20 lap championship contest. Jerry Farmer got to the front and led the event, only to see his son, LJ steam into the lead in the final laps to take the win. Jezylo held on to second spot, Aaron Greathouse was third, Jerry Farmer fourth and Adam Jezylo fifth. Wilburn Parks, Leroy Farmer, George Burgess, Trevor Farmer and Taylor Papineau completed the top ten. 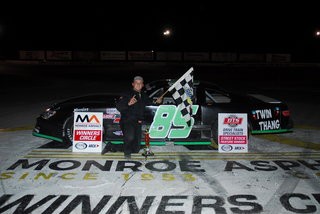 Selmi led the 31 car field in time trials with a lap of 13:351, with Leroy Farmer leading the B cars at 14:029. Studt, Worley, Lonnie York, Parks and Adam Jezylo were the heat winners.

It turned out to be a very special night for the Whisman family at Flat Rock Speedway. Dennis Whisman Sr. came out on top in the 25 lap ARCA Victory Lane Quick Oil Change Figure 8 championship race, and his son, Dennis Jr., finished second and grabbed his first-ever track championship in the process. Ethen Lambert was quick as he led the first 10 laps of the race, dogged by Whisman Sr. Dennis snuck by Ethen in traffic on lap 11 and held the point the rest of the distance to take the win. Whisman Jr. also got by Lambert late in the event to take third, setting up a huge celebration for the family. Lambert’s great run gave him third, his father, Dave, was fourth and James Vanderhoof was fifth. Stephanie Bradley, James Pankow, Greg Studt and Jakob Lee completed the finishing order. Jeremy Vanderhoof set fast time at 20:547. A nasty wreck in the heat race ended the night for Jeremy Miller and Vanderhoof. Heat race winners were Whisman Sr. and Ethen Lambert. 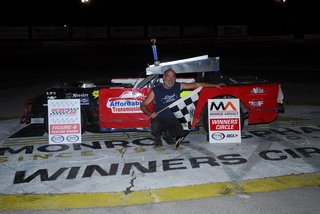 Saturday, August 31 is the next event at Flat Rock Speedway, with a special 6 p.m. start time. It’s the Dani’s Transport School Bus Figure 8 race! The popular event is expected to once again draw a huge crowd. A Boat Figure 8 race, flag pole race and Stock Car Racing with the Street Stocks and Figure 8’s will entertain the crowd Saturday evening.

Pre-race ticket sales are taking place and will end at 5 p.m. Friday evening, August 30. Tickets are available by phone or at the track. When tickets go back on sale Saturday at 3:30, tickets will only be sold at the track on a walk-up basis (no phone orders or email orders after 5 p.m. Friday).