Sheppard, the 2018 Enduro Series champion, took the lead in a great battle with fast qualifier Ethan Stadniczuk (13:928) just before the half-way mark of the 250 lap contest, which went all green flag and was completed in 1 hour and 3 minutes. Ethan dominated the 25 car field from the early stages as he got by Ed Case and built up a sizable lead, but Sheppard whittled the gap and edged by the leader. Ethan came right back to take the top spot, then tangled with Rick Bennett, allowing Derrick to assume control once again. Stadniczuk righted his #20 and continued on, as Sheppard sailed to the win. Stadniczuk took second, Kyle Metdepenningen third, Robb Remick fourth and Case fifth. Jacob Thomas, Nathan Sprotberry, Troy Brehmer, Jimmy Rae and Cody Remick completed the top ten.

The Street Stock A Main turned into a wreck-fest from the start. On the original green, the front row of Clarity Patton and Kyle Worley tangled, stacking up the entire 19 car field. With plenty of damage to a just about everyone, the field was sent to the pits while the cleanup ensued. The B Main 15 lap event was then run first, with LJ Farmer getting by Wilburn Parks on the final lap to take the victory and visit the Monroe Asphalt Winner’s Circle. Adam Jezylo, Taylor Papineau, Ian Jezylo, Trevor Farmer and Rich Abel were next in line at the finish. 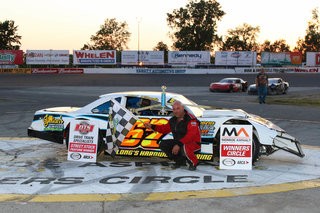 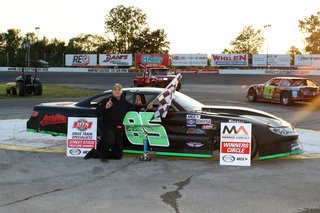 The A Main 25 lap feature returned to the track for another shot at racing. Patton took the lead on the green while Landon Schuster worked the high side and nosed in front after several laps of trading the lead back and forth. With 5 to go, the lead duo tangled, bringing out the yellow and since both drivers could not agree, both cars went to the rear. Rob Randa was now on the point and got plenty of heat from Greg Studt over the final 5 laps. Studt closed in strong at the line but came up a door short as Randa grabbed the win. Studt was second, Nick Shanks third, rookie Max Fair recorded his best finish of the season in fourth and Schuster was fifth, followed by Guy Fire, Chris Diovardi, Patton, Rob Moore and Rob Moore Jr. Studt led the 29 car field in qualifying with a lap of 13:378. Trevor Farmer, David Liaeff, Schuster and LJ Farmer took the heat wins. 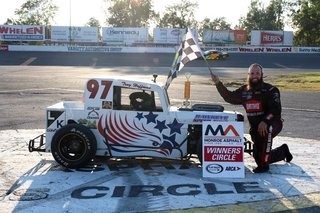 The next event on the Flat Rock schedule is the Firecracker 150 and Monroe Superstore Fireworks Spectacular Saturday evening, July 6. The feature race-only format for this night has the ARCA Moran Chevrolet Late Models battling in a 50 lap race. The ARCA DTS Drive Train Specialists will run 50 and 20 laps for the A and B Mains, respectively, and the ARCA Victory Lane Quick Oil Change Figure 8’s will go 30 laps in the Michigan Figure 8 Championship.  The Bandoleros will also hit the track July 6.

is this a real website never see any comments? Oh well.

Because you cant pick on the "girl" it politically incorrect.

Can someone please give frank boxstand my number ... just have. Few questions . Just don’t understand how one week you can black flag someone (YOU don’t like) for just pushing someone high (paybacks) but not wrecking them ... but this week this person brings out 4 cautions and wrecking 17 cars and don’t even get nothing said to them over the radio ?????? I think some people need some explanations on that one .. supposed to be making this business grow but the way it’s going your gonna keep losing cars ....