Michigan native Jim Hettinger, the 1984 and 1990 ARCA Midget Series champion and all-time winningest series driver with 38 victories, passed away Saturday March 24 at the age of 67.

In January at the Michigan Auto Racing Fan Club Banquet, Hettinger was presented the MARFC Eddie Sachs Memorial Lifetime Achievement award by USAC President Kevin Miller. His brief but moving acceptance speech delivered from his wheelchair drew the only standing ovation of the night from the crowd of over 500, with his message of sportsmanship and respect for fellow racers and for the sport directed to the many youth racers in attendance. 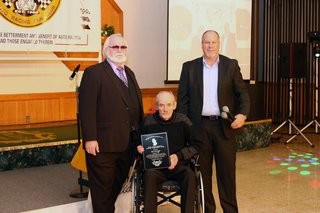 Hettinger started his career in Quarter Midgets at age 8, going on to win the Eastern Quarter Midget Championship. He drove full-size midget cars for the first time in 1972 in both the CORA and AMRA Midget Series, where he finished 4th in points and won AMRA Rookie of the Year. He went on to race in the East Coast ARDC Midgets and was championship runnerup in 1975, then moved to USAC Sprints and Midgets in the 70s, and Dave Bruce’s WWAR Midget Series in 1979. In 1984 Hettinger won the ARCA/WWAR Midget Series and NAMARS Midget Series championships along with track titles at Anderson Indiana and Grundy County Speedway in Illinois. In 1990 he was again the ARCA Midget Series champion, continuing to win in USAC Midget competition at Indianapolis Raceway Park and won the 10th annual Hoosier Dome indoor race in ’94. By the late 1990s Hettinger had recorded 126 feature wins in midget competition. He was inducted into the Michigan Motorsports Hall of Fame in 1998.

After retirement from driving, Hettinger supported the racing efforts of his son Chris Hettinger, also a winner in open wheel midget racing, and more recently his racing granddaughters Katelyn and Grace Hettinger.

Funeral services will be at Muir Brothers Funeral Home, 1021 S. Lapeer Road, Lapeer MI 48446, (810) 664-8111. Visitation is scheduled for 4-8pm Tuesday March 27 and Wednesday March 28, with Memorial Service Thursday March 29 at 11am. Burial will follow in Mt. Pleasant Cemetery in Dryden. Memorial contributions may be made to USAC Benevolent Foundation, 124 East Northfield Dr., Suite F #129, Brownsburg Indiana 46112 (www.usacbf.org). Condolences and memories may be shared at www.MuirBrothersLapeer.com.