Flat Rock, MI—May 7, 2016: If the Jet’s Pizza Season Opener at Flat Rock Speedway is any indication of the type of racing in store for this year, race fans are in for a treat. 3 of the 4 main events were decided by a car length or less as the ¼ mile paved oval kicked off its 2016 schedule Saturday night. Corey Duane scored his first-ever Moran Chevrolet Late Model win, Kyle Worley held on for the victory in the DTS Drive Train Specialists Street Stock feature, Rich Abel dominated the Street Stock B Main and Jeremy Miller was the winner of the Victory Lane Oil Change Figure 8 feature.

A field of 21 ARCA Moran Chevrolet Late Models were on hand Saturday, and the night began with first-time visitor Steve Needles setting the Moran Chevy quick time with a lap of 11:740. Steve drew a 10 for the inversion for the 50 lap main event. The number 10 was also drawn as the “Mystery Award” number, which awards a driver that starts the feature from that position a bonus if he wins the race. The bonus, put up by an anonymous fan, was at $200 Saturday.

Chris Benson grabbed the lead on the green, while the pack battled for position. Needles had moved to 5th by lap 24 and the first yellow of the night came out on lap 26 when Craig Everage and Benson tangled in turn 3. Benson’s night ended there with a flat tire after a great run out front. Corey Duane had moved up on the leader just before the yellow and was now in the number 1 spot on the restart. Corey jumped ahead of Paul Pelletier and built up a 3 car length lead. As the laps quickly clicked off, Needles began to make his move. Pelletier had closed in again, but Needles zipped to the high side to grab second at lap 42. With 4 to go, the lead trio battled hard. With a lapped car on the bottom, Duane edged up on the outside and stayed there. On the white flag lap, Needles powered his way to the top lane, while Pelletier dove low behind the lapped car. Corey edged out Pelletier by a ½ car length to grab his first-ever Late Model win. Pelletier was second, Needles third, Stan Yee Jr. fourth and Tadek Stadniczuk recorded his best-ever finish with fifth spot. Terry Bogusz, Frank Jiovani, Matt Bullock, Joe Hawes and Jimmie Ward Jr. completed the top ten. Jiovani was the Moran Chevy Hard Charger bonus winner, moving from 19th to 7th at the stripe. Heat race winners were Benson, Everage and Kevin Stepinski, who was at the wheel of a Late Model for the first time in his career. The “Mystery Award” bonus now goes to $300 for the May 21 event for the division.

While Kyle Worley led every lap of the 25 lap ARCA DTS Drive Train Specialists Street Stock A Main, his win was well-deserved. Kyle had a sensational side by side battle with 15 year old Ray Morneau Jr. for over a dozen laps and then had to hold off a late charge by Greg Studt to grab the victory. In the final 5 laps, Studt went to the top lane to try to grab the win, while Morneau darted low. At the checkered flag, Worley took the win, with Morneau just edging out Studt for second spot. Fourth was Nick Shanks and fifth was Clyde McKee. Guy Fire, Craig Lange, Ian Jezylo, Randy Cornett and Wilburn Parks completed the top ten finishers.

The ARCA Victory Lane Oil Change Figure 8’s staged a 20 lap feature race, as Jeremy Miller held off a race-long challenge from defending champ Billy Earley to grab the win. Randy Roberts led at the start, but Jeremy quickly moved to the front to take control. Earley was in tow and the duo zipped back and forth, dodging several intersection close calls. Miller was up to the task and took the win over Earley, Dennis Whisman Jr., Roberts, Parker Wade, rookie Travis Earley, David Katfiasz and Dennis Whisman. Rookie Ricky Ferrell did not start the event. Earley posted the Fastime Racing Engines and Parts quick time at 20:835. Miller took the heat win.

Saturday, May 14 is the NASH Icon 98.3/UAW Local 3000 Kids Night! All kids to age 12 will be admitted FREE with a paid adult, and will also receive a FREE hot dog! The Victory Lane Oil Change Figure 8’s, DTS Drive Train Specialists Street Stocks and the first Monroe News 250 lap Enduro race of the season will hit the track! The TKC Go-Kart Club will stage exhibition races prior to the race card. 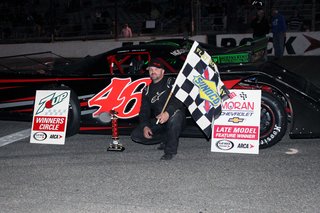 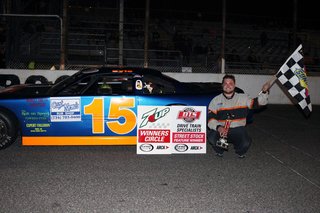 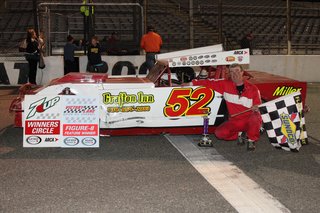 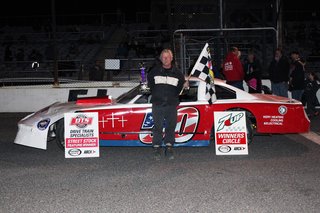 Congrats kyle on a great win, always fun to win the season opener.i was hoping to get up there and mix it up with ya but a ridiculous call put me to the rear, oh well thats racing lol.