Flat Rock, MI—July 25, 2015:  Flat Rock Speedway fans were treated to an incredible night of action and excitement as Jeff Ganus slipped under leader Brian Bergakker with 22 laps go to and grabbed  the win in the Moran Chevrolet-Stan Yee Memorial 150 Saturday night.  Pat Moran of Moran Chevrolet and Ann Yee, Stan Sr.’s widow, presented the trophies to Jeff in the 7-Up Winner’s Circle.  For the second straight week, a quick-hitting, heavy rain shut down the Praxair Figure 8 feature race.  The rainout feature, however, from July 18 was completed, with Dennis Whisman scoring the win.

The annual 150 lap race was race number 5 of 6 in the ARCA Royal Truck and Trailer Late Model Gold Cup Series.  A total of 31 cars were in the pit area, with Brian Bergakker, in his first trip to Flat Rock in a Late Model, posting the Diamond Racing Products ($333) and DTS Drive Train Specalists Gold Cup fast time award ($100) with a lap of 11:645.. Brian’s only other race at Flat Rock was in an Enduro event several years ago.  Bergakker is the current point leader at the Berlin (Grand Rapids), MI Raceway.

17 cars were locked in through time trials.  The top 2 from each of a pair of 15 lap last-chance races moved to the 150.  Scott Hantz and Joe Hawes captured the events, with Corey Duane and Don St. Denis also moving to the main event.  The Flat Rock provisional starting spots to fill the 24 car field went to Craig Everage and Paul Pelletier, while Scott Pemberton was the Gold Cup provisional.

With an inversion of 10, Derek Wiley and Dennis Strickland brought the field to the green flag.  Dennis darted out front and stayed there until lap 15 when Terry Senneker, from his 5th starting spot, took the point.  Senneker zipped along and built a solid lead as laps 12 through 83 went all green flag.  The fast-paced race, which saw just 4 yellows for minor incidents, kept things interesting as a very evenly-matched field battled hard for every spot.  Bergakker got trapped a bit in solid competition for spots early and had moved up just 2 spots in the first 32 laps.  Brad Riethmeyer charged up from 11th to 6th by lap 20 and was very strong early on.  At the lap 50 mark, it was Senneker, Strickland, Dakota Carlson, Riethmeyer, Eric Lee, Ganus, Bergakker, Hantz, Stan Yee Jr. and Steve Cronenwett Jr. 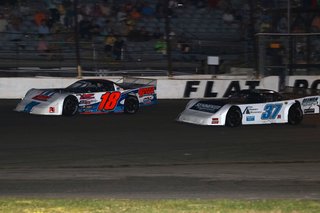 Nearing the half-way mark, Bergakker had moved to 5th by lap 72, while Ganus began his move to the front, trying to chase down Senneker.  At lap 75, Senneker led Carlson, Ganus, Strickland and Bergakker. 5 laps later, Ganus snuck by Dakota for second, pushing his #18 hard to have a shot at the leader.  And that came when the second yellow appeared on lap 83 when Chris Benson got crossed up in turn 3, getting into the rear of Senneker in the process.  There were still 15 cars on the lead lap, but the pace was about to pick up very, very quickly.  On the restart, Ganus steamed into the lead, using the high groove to get by Senneker.  Harold Fair Jr. called it a night as he retired from the event and Everage, who had been in the top 10, brought out the final yellow on lap 90 when his car broke and had to be towed off the track.  Those final 2 yellows in the next 7 laps set up the great action up front and throughout the pack, as the final 60 laps were all green flag and the chase for the Gold Cup was tremendous! 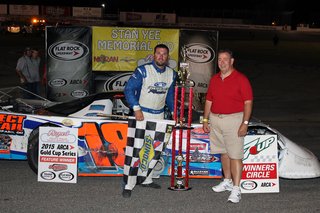 Senneker battled back and snared the lead away from Ganus on lap 97.  Bergakker now entered the fray, and the trio used every inch of asphalt going for the lead.  They sandwiched lapped cars, went up into the 3rd lane, and put on a great show.  Bergakker grabbed the lead in a 3-wide move on lap 107 as he snuck down to the bottom of the track in heavy traffic to grab the top spot from Terry.  Ganus, however, was not done.  Jeff got bottled up for a few laps but stormed back into the number 1 spot on lap 128, nosing under Brian going into turn 1.  Ganus stayed in command and grabbed the win, his 3rd in 5 Gold Cup races this season.  Bergakker’s great run gave him second, Senneker was third, Carlson was solid in fourth and Riethmeyer took fifth spot.  The top 5 cars were all on the lead lap.  Strickland, Hantz (from 18th), Jeff Plumb, Lee and Wiley completed the top 10.  Pelletier, Frankie Jiovani, Justin Schroeder, Duane, Hawes, Cronenwett Jr., Benson, St. Denis, Yee Jr., Pemberton, Fair Jr., Everage, Nick Bailey and Bryan Richards completed the finishing order.  19 of the 24 cars finished the race. 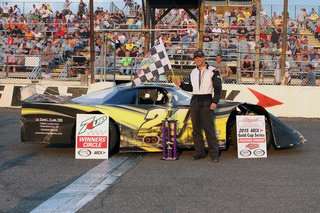 Saturday, August 1 Flat Rock Speedway will see the Monroe News Enduro Series 250 lap feature race for the class hit the track.  The ARCA DTS Drive Train Specialists Street Stock division will also be in action with a full slate of racing.  The pit area opens at 3:30, practice begins at 5, time trials are at 6 and racing begins at 7 p.m.  The front gates will open at 5.