A host of Flat Rock and Toledo Speedway’s champions were recognized during the annual Michigan Auto Racing Fan Club (MARFC) banquet held Saturday night in Warren, MI.  The club invites champions from every track in the state to attend the evening’s festivities. 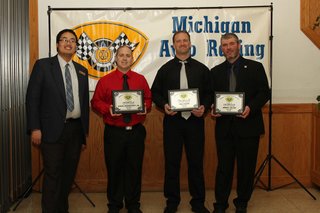 The Fan Club also honored Dan Dow as one of their Mechanics of the Year recipients.  Dan is the engine builder for sons Rob and Tim Moore in the ARCA Street Stock class.  Dow also builds powerplants for several additional teams.

The Midwest Racing Scene doles out the Pavement and Dirt Driver of the Year Awards at the banquet.  Midwest owner Terry Fitzwater presented the Pavement honor to Steve Cronenwett Jr.  The winner is selected by a fan vote. 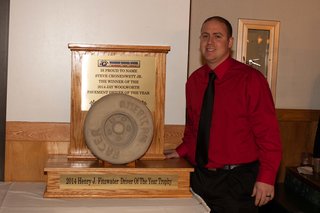 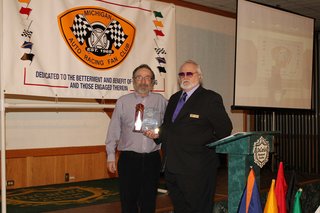 Congratulations to Dan Dow on the Mechanic of the Year Award. He has worked very hard for a lot of years and it's great to see the success he and Tim and Rob Moore are enjoying. Also congratulations to Stevie Cronenwett, and also to Steve, very deserving ARCA Late Model champion this season at Flat Rock and Midwest Racing Scene Pavement Driver of the Year. ARCA is proud to have you guys racing with us.

Thank you ron, this means alot to our family and will enjoy every bit of it.thank you for giving my friends and family a great track to spend our summer at.