A great field of 24 ARCA Moran Chevrolet Late Models were on hand for the first night.   While the 50 lap main event was a marathon, the battle for the lead was exciting throughout the contest. A re-start stack-up eliminated several cars early on, while numerous yellows slowed the event. Stan Yee Jr. led the opening laps until Chris Benson wheeled by to take the point. On the charge was Frankie Jiovani, last season’s Rookie of the Year. Jiovani took the lead just before the halfway mark, but a number of yellows erased any lead. 4-time Flat Rock champ Eric Lee used the outside lane and the duo put on a great battle until the pair spun, with no contact involved. The track was oiled down when Jimmy Alvis cut an oil line, with Jiovani and Lee returned to their respective spots. Lee stayed out front as Jiovani reeled him back in at the finish, with Lee claiming the victory over Jiovani, Yee Jr., Justin Schroeder, Derek Wiley, Steve Cronenwett Jr., Scott Pemberton, Jeff Plumb, Jeff Vrsek and Benson. Wiley set fast time at 11:594, with the heats to Brad Turner, Angola, IN native Craig Everage and 3-time track champ Paul Pelletier. 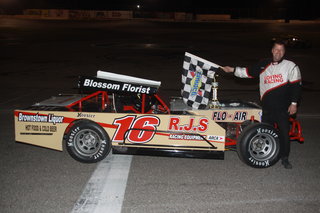 The ARCA Praxair Figure 8 division put on their usual thrilling event, as Robbie Loving nosed by race-long leader Jeremy Miller on the final lap to win the 20 lap feature. Miller had built up a nice cushion in the first 10 circuits, but Jeremy Vanderhoof and Loving broke loose and caught the leader with 6 laps to go. Loving used a lapped car to his advantage and stole the lead and the win. Miller held on for second, Vanderhoof was third, Greg Studt fourth and Billy Earley fifth, followed by Dennis Whisman, rookie Race Loving, Danny Apperson, rookie Ethen Lambert and rookie John Lambert. 15-year old Race Loving, Robbie’s son, won his first-ever checkered flag in the heat race. Studt captured the other heat race. Whisman posted the Fastime Racing Engines and Parts quick time with a lap of 20:813. 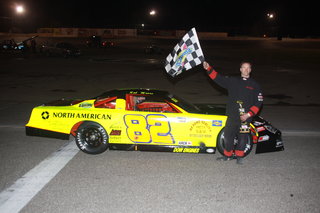 The ARCA DTS Drive Train Specialists 25 lap Street Stock feature was all Rob Moore, as Rob held off several challenges for the lead on his way to the checkered flag to open up the new season. Landon Schuster challenged on the high side in the final 8 laps, but Fastime Racing Engines and Parts fast qualifier Nick Shanks (13:597) dove under Landon and grabbed second at the stripe. Tim Moore, Rob’s brother, also slid by to grab third, Schuster was fourth and Guy Fire was fifth. Clyde McKee, Craig Lange, 2013 Rookie of the year Corey Duane, Rich Abel and Kyle Worley completed the top 10. Early front runners Rich Frantz, Tadek Stadniczuk and Scott Selmi retired from the race, with Tadek and Selmi the victims of an accident. Heat race winners were Rob Moore, Lange and Don Roberts.

Racing Fan Club Night is set for Saturday, May 3 at Flat Rock Speedway. The Late Models, Figure 8’s and Street Stocks will hit the track for another night of great family fun and entertainment. Race time is 7 p.m.