The 19 car field took the green flag in the Moran Chevrolet Late Model main event, but a lap 1 yellow flag bunched the field for a double-file restart. Paul Pelletier, the fast qualifier at 11:722, moved quickly to the front of the field and stood on the throttle to build a solid lead while the rest of the pack battled for position. It appeared that a long stretch of green flag would continue to the lap 50 finish, but Paul's margin was erased by a yellow flag on lap 41. The Trenton, MI native went right back to work and pulled away on the restart for the final 9 laps to grab the victory. A great battle between Frank Jiovani and Derek Wiley for second spot saw the duo run side by side for those final 9 circuits, with Frank edging out Wiley for the runner-up finish. Steve Cronenwett Jr. was fourth and Scott Pemberton fifth. Jeff Plumb continued showing improvement in 2014 with a sixth place run, Stan Yee Jr. was seventh and Jim Bailey came from 19th to eighth spot at the stripe. Chris Benson and Jeff Vrsek 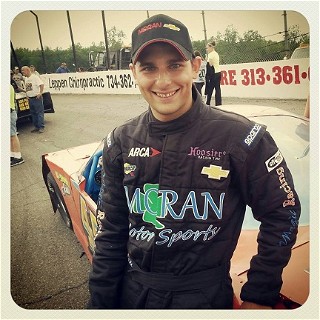