A contingent of nearly 100 former racers were honored in pre-race ceremonies.  Many are still actively involved and were working on race cars in the pit area, but a large group was introduced to the crowd.  Track Owner Ron Drager presented a plaque to Jack Wyman, who served as Grand Marshal of the event. Wyman served as the pit registrar for several decades and fielded a car for the very first race at Flat Rock on August 14, 1953.  The Monroe Superstore fireworks display ended the festive evening. 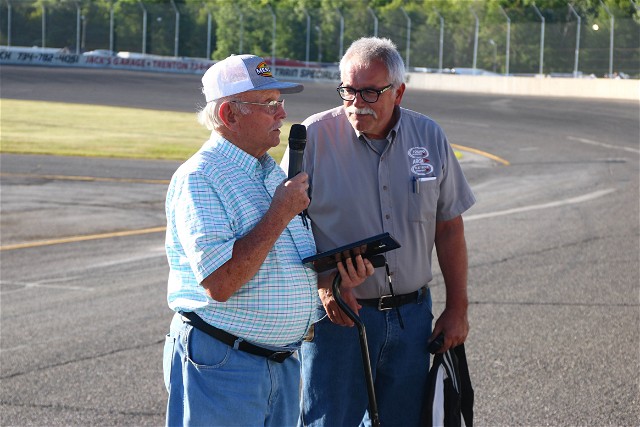 The features-only format saw the Salenbien Excavating Late Model Sportsman kick off the race card. A host of yellow flags stalled the pace of the race early, but things finally settled down for the 25-lap feature.  Pole-sitter Kyle Worley fended off the challenges of Jim Froling to score his first-ever win in the class.  Froling finished second, Ron Allen used the second groove in the final 10 laps to get back to third after falling to the back.  Howard Kelley Jr. was fourth and Jeremy Vanderhoof fifth, followed by Greg Studt, Todd Perkins, Andy Harding, James Brazeau and Dan Grigsby.  Froling set quick time at 13:091. 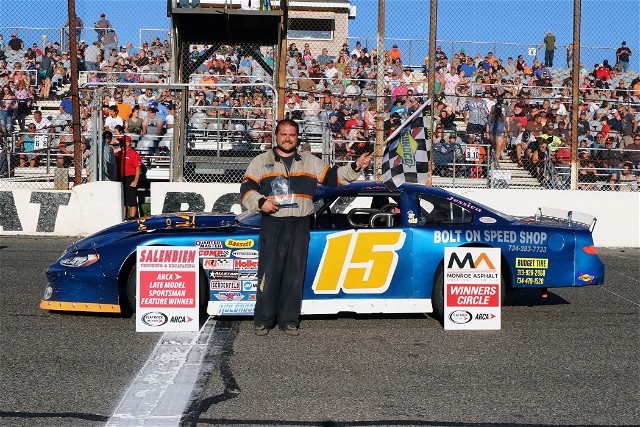 Current point leader Eric Lee continued his strong season, taking the win in the 50 lap ARCA Outlaw Super Late Model feature race.  Just before the start, outside front row man Paul Pelletier pulled into the infield with mechanical issues.  Lee took control on the first lap and was pushed by Dennis Strickland and Conner Zbozien the entire race. Conner got by Dennis on a lap 40 restart and took second spot, got to the rear quarter panel of Eric with 5 to go but had to settle for second as Eric grabbed his 3rd win of 2022.  Strickland came home third, Chris Benson fourth and George Rangel fifth, followed by Joshua Spindleman, Bryan Moore, James Pankow, Dan Trosen Jr. and Austin Thiel. Justin Schroeder encountered mechanical problems in practice and scratched for the night. Lee set quick time at 11:819. 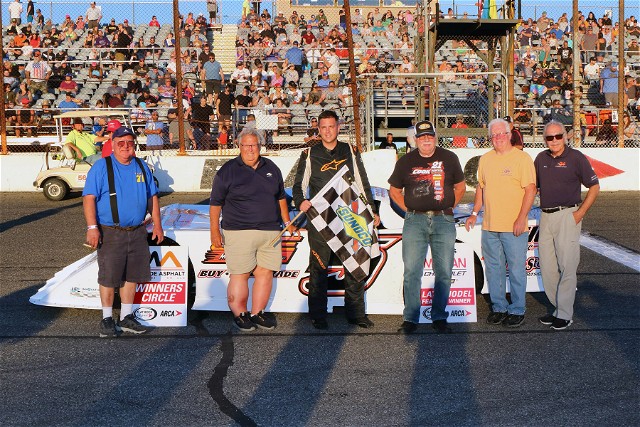 Jeremy Vanderhoof held off a fast-closing Greg Studt in the final 2 laps to win the ARCA DTS Drive Train Specialists Street Stock 30 lap A Main contest.  Rob Moore Jr. led the first 9 laps, with Jeremy taking over the top spot on lap 10.  The lap 28 yellow set the stage for Studt to make a bid for the win.  Vanderhoof held on for his 2nd win of the season.  Studt was second, Doug Litogot continued his recent strong runs with third, fourth was Kenyon Knight and fifth was Corey Duane.  Moore Jr., Johnny Rangel, Paul Hahn, Landon Schuster and Kyle Worley rounded out the top ten. 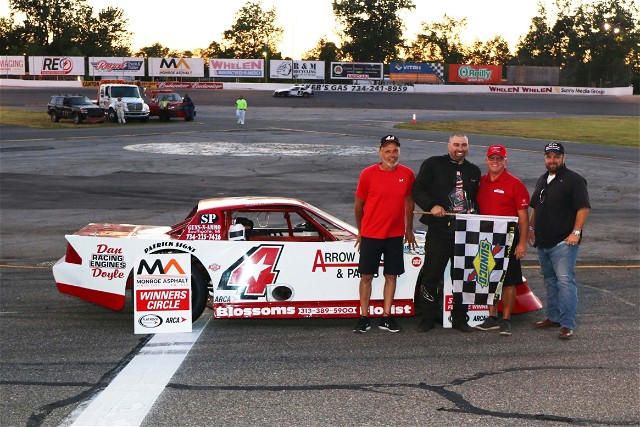 Trevor Farmer snared the lead from Taylor Papineau on lap 9 on his way to the win in the 20 lap DTS Street Stock B Main feature race.  Austin McKee, Brandon Randa and Ian Jezylo filled out the top 5.  Mike Miller, Robert Stewart and Joe Rozek completed the finishing order.  Pole sitter Rich Abel pulled to the infield before the green with a flat tire.  Litogot led the 32-car field with a lap of 13:353.  Brandon Randa led the B cars at 13:947. 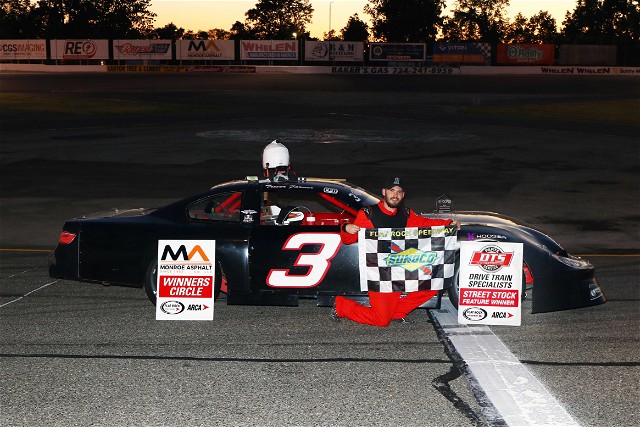 A wild 30 lap ARCA R & M Recycling Figure 8 feature saw 3 leaders and some intersection action, including a crash.  Joe Vanderhoof led the first 3 laps until Dennis Whisman Jr. steamed by to take the point.  Whisman set a quick pace and had plenty of company as Jeremy Vanderhoof, Billy Earley and Greg Studt took up the charge.  On lap 21, rookie Jeff Minnick slowed up at the intersection and Jakob Lee had no place to go, tagging Minnick and having his car stop right in the middle of the cross-over, bringing out the red flag. Whisman Jr. clipped the edge of a car and flattened a left front tire, sending him to the pits.  Earley was now the leader and Billy’s patience paid off as he led the pack to the checkered flag, scoring his first win of the year over Studt, Brice Thomsen, Eugene Worden, Joe Vanderhoof, Whisman Jr., Rich Lee, Jeremy Vanderhoof, Jakob Lee and Travis Earley.  Jeremy Vanderhoof slowed in the last few laps while running second and dropped in the finish, while Whisman Jr.re-joined the field after changing a tire on the red flag.  Whisman Jr. set quick time with a lap of 20:723 on the Figure 8 track. 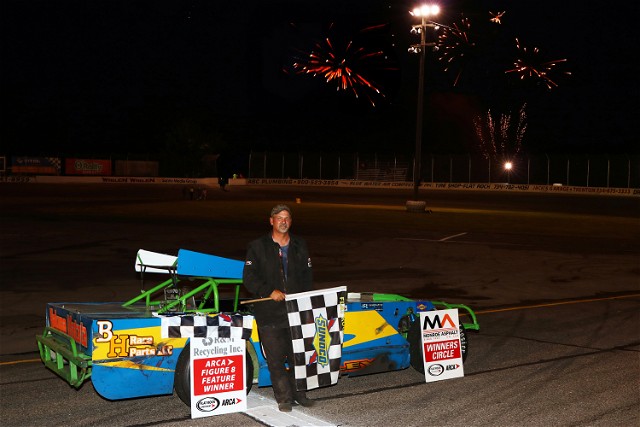 Saturday, July 16 is Kid’s Day at Flat Rock Speedway!  Kids 12 and under are FREE and receive a FREE hot dog!  And the first 100 kids through the front gate will receive a FREE T-Shirt, courtesy of Salenbien Excavating!

There is no advance ticket sale for this race.  All tickets go on sale at 5 p.m. race day at the track.  Parents will pick up the kids tickets at the ticket windows on Saturday.

The pit gates open at 3:30, the ticket office and front gates open at 5, race car practice also begins at 5, followed by qualifying. Race time is 7 p.m.

The Salenbien Excavating Late Model Sportsman, the DTS Drive Train Specialists Street Stocks and The Vault Antiques and Treasures 250 lap Enduro race are on the schedule for this fun-filled night of family entertainment.

Congratulations to the entire ARCA team on a successful Anniversary program. You guys did a great job.