An outstanding 38 car field was primed for the biggest race of the season at the track for the Street Stocks. The 10 car inversion put Rob Moore and Landon Schuster on the front row. Moore darted into the lead at the start and held that spot as Studt began to apply the pressure. The duo ran door to door for several laps until Greg nosed out front on lap 24. Froling fell back early on, then moved back into the top 5 by lap 35. That pair began to pull away from the field and at lap 50 it was Studt, Froling, Rob Moore, Ethan Stadnicuk and Nick Shanks.

Stadniczuk broke loose and moved to third by lap 55, but his car began to slow and then resume speed the rest of the race, as he tried to reel in the leaders. A great battle for fourth waged on for about 35 laps as Moore, Shanks, Jeff Metdepennigen and Guy Fire were bunched together. Jeff ran the outside groove for much of that time, trying to move up. He and Rob Moore tangled and the yellow came out, with both cars going to the rear of the field. Several yellows in the final 20 laps slowed the action and gave Froling the chance to apply more pressure to Studt. Greg stayed tucked in the low lane, Froling in the second groove, as they ran door to door. Greg held on for the big win worth $1000 and with lap money, took home $1380 for the night. Froling was second, Metdepeningen got back to third, Clarity Patton was fourth and Moore fifth. Caleb Barron came on strong in the late stages to grab sixth, Arnold Kirsch seventh, Wilburn Parks eighth, Stadniczuk held on for ninth and Vaughn Chambless was tenth. Cody Hall, Shanks, Fire, Landon Schuster, Rob Moore Jr., David Liaeff, Rob Randa, Aaron Greathouse, Kyle Worley, Tim Moore and Steve Searles were next in the finishing order. Searles, the last car to qualify, set fast time at 13:277, but dropped to the back on the parade laps with ignition troubles.

Troy Brehmer took advantage of a skirmish with the lead pair with 2 laps to go and sped to the win in the 30 lap ARCA DTS Drive Train Specialists Street Stock B Main. Race leader Lonnie York and Trevor Farmer battled up front and the lead duo tangled on lap 28 as both cars spun, bringing out the yellow flag. Both cars went to the rear. Brehmer, who was running third and gaining ground on the leaders, was now in charge and zipped to the win. Alan Kennedy, Jerry Farmer, York, Chris Diovardi, Ian Jezylo, Trevor Farmer, LJ Farmer, Leroy Farmer and Conor Papineau completed the top ten. Rich Abel, Joe Rozek, Taylor Papineau, Steve Chartrand and Adam Jezylo completed the rundown. A scary incident in the final laps saw Ian Jezylo and Abel get hooked together in the back straight, sending both cars through the infield, with Abel slamming into the tires that surround the turn 4 light pole. Both drivers were ok. Jerry Farmer set fast time for the B field at 13:772. Doug Litogot and Max Fair both encountered mechanical problems and did not compete. 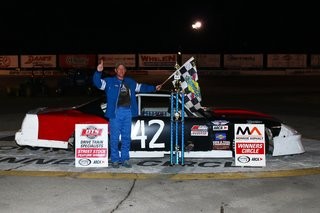 Toledo resident Howard Kelley Jr. zoomed into the lead in the early stages of the 25 lap ARCA Late Model Sportsman feature, only to see his lead go away when the red flag came out on lap 16. Jimmy Wahl and Robert Meiring got hooked together and crashed into the turn 1 wall, sending Meiring up onto his side, driver door down. The safety crews did a great job getting his car back on all 4 wheels and Meiring climbed out and waved to the crowd. When the race restarted, Kelley had lots of company at the front. Tom O’Leary IV and then Ron Allen challenged the leader, as Allen got by Tom and went right to the outside groove. The battle ensued as that pair ran door to door for the final 7 laps with Kelley holding on for the win over Allen, Mike Young, O’Leary IV and Grant Hedges. Kent McCloskey, Kenny Sharp (in his first race at Flat Rock and with the class), Greg Stilwell, Adam Plonski, Andy Harding, Dan Grigsby, Meiring and Wahl were next in line at the finish. Young set fast time at 12:968. Hedges and Plonski were the heat winners. Plonski’s win was his first checkered flag. 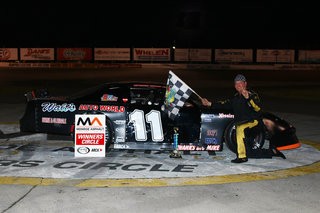 Joel Smith ran laps in his #24 Bandolero machine also Saturday evening. The TKC Go-Karts ran an exhibition race prior to the start of the show, and a Kids Power Wheels Derby also took place. 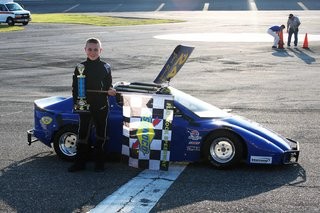 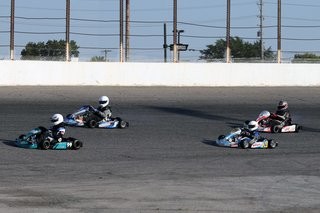 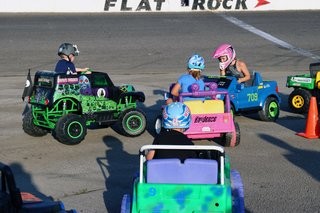 It’s a Friday night race special Friday, August 9 at Flat Rock Speedway. For just this week, there will be no Saturday night racing. Friday is UAW Local 3000 Night and Kids Night! All kids to age 12 will be admitted FREE and receive a FREE hot dog! On the track, the ARCA Victory Lane Quick Oil Change Figure 8’s return to action as well as the ARCA DTS Drive Train Specialists Street Stocks. Race #3 of The Vault Antiques and Treasures 250 lap Enduro Series is also on the race card.

The pit gates open at 4 p.m., practice begins at 5:30, followed by qualifying and race time, which is 7:30 p.m. for the Friday night special.

David, i would like to second all those comments the 26 just bangs his way through the field and nothing said to him ever, he has done that to me a couple weeks pisses me off the tower looks the other way for certain jackass racers. That moron 78 tries to dump me in turn spins himself because of being a bad driver and the tower sends me to the rear we cant help when people hit us from behind so explain this stupid rule is it just easier to do that then make a call? This has been the worst year in the 30 years i have been out there.

Hey you left out the part where Jim Froling in the 26 blatantly took out the 118 car destroying two cars in the process.. and then got to keep his spot after doing so. What a joke. Also forgot to mention that there was only 12 cars running after about 30 lap. What a joke this class has become. If the tower is going to have bad judgement just like half the drivers this year then let the drivers who actually like to race handle it after the race instead of threatening to suspend them. Suspend the drivers who are wrecking people week in and week out. Nobody likes racing for 300 dollars and spending 500 in tires and 500+ in repairs every week. Im tired of bad drivers and bad calls from the tower.