After 3 tries, the Late Model Sportsman teams returned to the pit area as a host of cars were damaged in the attempts to start the event. When the class returned to the track, Greg Stilwell grabbed the lead at the green flag. Allen charged quickly to the front and took the point on lap 7 and built up a sizable lead. A great 5-car battle ensued for second spot. Howard Kelley Jr. went to the outside lane and grabbed second but ran out of time to track down Allen at the finish. Mike Young also went to the high groove and moved up in the final laps to take third, Grant Hedges was fourth and Stilwell fifth, followed by Tommy O’Leary IV, Kent McCloskey, Andy Harding, Kyle Worley, Robert Meiring, Adam Plonski, Jimmy Wahl and Dan Grigsby. Hedges and Grigsby were the heat winners. Young was the fast qualifier at 13:037, a new track record for the class.

Third-generation driver Jacob Lee won out in a race-long battle with Dennis Whisman Jr. and then held on in the final 2 laps on a sprint to the finish to grab his first-ever win in the 20 lap ARCA Victory Lane Quick Oil Change Figure 8 feature event. Lee and Whisman Jr. battled back and forth right from the start. Whisman looked high and low but to no avail. Joe Vanderhoof reeled in the leaders in the final 5 laps and joined the fray, and as the trio came down to the checkered flag, Lee crossed the stripe for the win, while the challenging duo went spinning down the track, allowing James Vanderhoof to sneak by to grab second spot. Joe Vanderhoof was third, Ethen Lambert fourth and Whisman Jr. fifth, followed by Dave Lambert and Stephanie Bradley. Dennis Whisman Sr. and James Pankow were scratched from the race. Ethen Lambert took the heat race, while Whisman Jr. set quick time at 20:721. 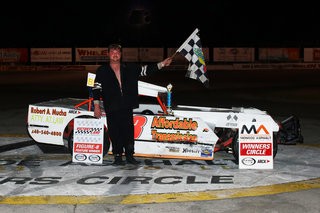 Make it 2 in a row for Ethan Stadniczuk as he zipped along to win the 25 lap all-green flag ARCA DTS Drive Train Specialists Street Stock A Main Saturday night. Ethan took control right from the start, with pressure from Rob Randa and then Jim Froling. Ethan gradually edged out front to about a car length or 2 cushion as he sped to the victory. Froling was second, Greg Studt made a great charge in the final laps, coming from 7th spot to third at the finish, Scott Selmi did the same to take fourth and Rob Moore was fifth. Guy Fire, David Liaeff, Landon Schuster, Randa and Kyle Worley completed the top ten. 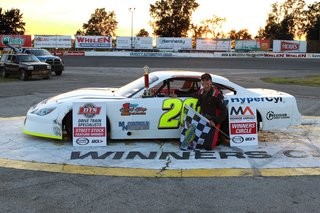 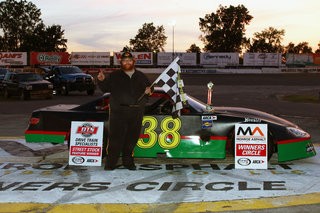 The Vault ARCA Factory Stock/Enduro class ran a 25 lap non-point race Saturday, and 4 drivers took turns leading the event. The action was at the front as Ian Jezylo led the first 4 laps. Bob Swanson then took charge, but on lap 8, Kenyon Knight zoomed into the lead. Kenyon held the point until lap 12 when Rayce Metdepennigen pulled into the number 1 spot and held it for the distance to take the win. Knight’s great run netted second spot, Matt Ringger was third, Chris Metdpenningen fourth and James Rae fifth, followed by Randy Padgett Jr., Steve Smith, Tom LaFollette, Jeff Wells and Jezylo. 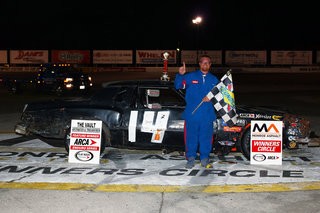 Chris Metdepenningen was the fast qualifier at 14:299.