Flat Rock, MI—August 18, 2018: It was a tough path for 3 of the 4 newly-crowned 2018 Flat Rock Speedway champions Saturday Night. The Harris Mechanical/Motor City Battery Season Championship events were filled with action and anticipation as Jimmy Thiel, Billy Earley, Grant Hedges and Ian Jezylo notched the 2018 track titles on a very warm and humid evening. Rain was reported all around the area, but just a very brief shower before practice was the only precipitation that fell during the race card. 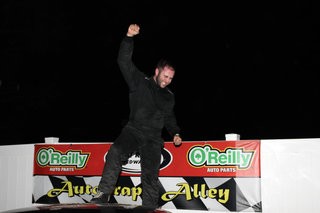 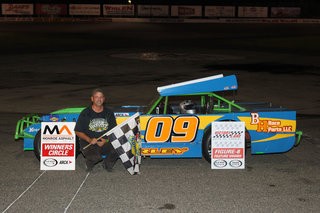 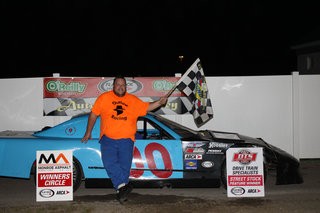 Thiel, looking for his first-ever championship at Flat Rock, played it conservative for much of the night. Jeff Vrsek took the lead at the start of the 50 lap ARCA Moran Chevrolet Season Championship race, but Craig Everage darted low on lap 5 to take the top spot and stayed in front on the way to his second win of 2018. Everage was able to keep Vrsek and later Frank Jiovani at bay as the Angola, IN driver zipped to the checkered flag, also securing his second spot in the final points. Thiel began to charge about half-way through the race, but suffered a flat tire when he went three wide and traded paint while battling for position. Jimmy had enough of a point lead to secure the title, then announced to the crowd that he will turn the wheel over to his son, Austin, in 2019. Jiovani came home second, Justin Schroeder’s late-race moves from 7th spot got him to third at the finish, with Vrsek fourth and Stan Yee Jr. fifth. Tadek Stadniczuk, Paul Pelletier, Steve Cronenwett Jr., Dave Stehouwer and Steve Hawes completed the top 10. Everage, Stadniczuk and Dennis Rederstorf captured the heat race wins. Pelletier set the Moran Chevrolet fast time as 11:946. The top 3 finishers in the feature received $300, $200 and $100 bonuses from Moran Chevrolet. Stadniczuk moved up 6 spots in the feature to claim the Moran Chevy Hard Charger Award. 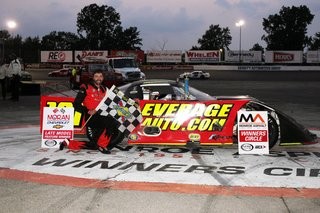 Jeremy Vanderhoof continued his winning ways, grabbing his 6th win of the season as he grabbed the victory in the 25 lap ARCA Victory Lane Quick Oil Change Figure 8 title race on his way to the Monroe Asphalt Winner’s Circle. The invert of 5 put Jeremy on the pole and he led every lap of the event, which was filled with some wild near-misses at the intersection the entire distance. John Lambert spun backwards through the cross-over at 1 point, but everyone missed the #04 as John righted his machine and continued on. Billy Earley, despite dropping out early when the steering broke on his #09, had a solid cushion going into the night and took his 4th track championship in a row. Greg Studt stayed within striking distance of Vanderhoof for a better part of the race and took second, Dennis Whisman Jr. was third, his father, Dennis Sr., took fourth and Eugene Worden fifth, followed by Ethen Lambert, John Lambert, Dave Lambert, Stephanie Bradley, David Katafiaz and Jeremy Miller. Earley set the Fastime Racing Engines and Parts quick time at 20:953. Vanderhoof and Whisman Sr. were the heat race winners 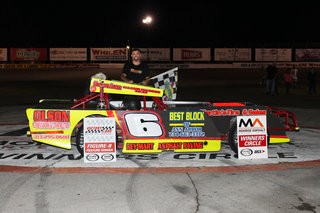 Grant Hedges and Ray Morneau Jr. were tied for the ARCA DTS Drive Train Specialists Street Stock A Main points going into evening. The duo were still tied after qualifying and the heat race, setting up the battle in the feature for the championship. The 4 car inversion put David Liaeff and Steve Searles on the front row. Before the first lap was completed, Searles had his engine let go, coating the track with oil and scattering the field. Hedges, starting fourth, went high to miss Steve, but his car shot back up the track and collected Grant, damaging his machine. With the red flag out and no laps complete, the pit gate was opened per track procedures and Hedges went to the pits where a large group of crewmen from several teams helped get Grant back on the track before the race was restarted. 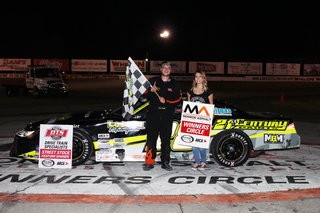 The field was reset and the green flew, as Liaeff nosed out front. Morneau, starting second now due to Searles’ exit, worked the high side to keep up with the leader, but the low groove was the place to be Saturday night. Hedges worked his way by Morneau as did Jeff Metdepennigen while Liaeff stayed in command. As the laps wound down, Jeff got by Hedges for second. With 2 to go, Morneau and Rob Moore tangled in turn 2, bringing out the yellow flag. Neither driver accepted responsibility, sending both drivers to the tail. Liaeff brought the field to the green and kept the lead, notching his first-ever victory at Flat Rock. Metdepenningen was second, Hedges’ third place run netted the #48 the track championship, fourth was Greg Studt and Guy Fire was fifth. Clarity Patton, Craig Lange, Morneau Jr., Rob Moore and Scot Bunge completed the finishing order for the top 10.

The best race of the night saw a door to door battle for the entire 20 laps as rookie L.J. Farmer held on to edge out 2018 champ Ian Jezylo for the win in the DTS Drive Train Specialists Street Stock B Main finale’. Farmer, who has shown improvement from the start, was on the inside lane and Jezylo was on the outside groove. The duo battled back and forth, with never much more than a fender separating the lead pair. Jerry Farmer, L.J.’s father, was in the thick of the battle, setting back in third and on the bumper of his son, and Paul Duffin side by side with Jerry, making it a 4 car blanket up front. Coming out of turn 4 to the checkered flag, Jezylo got his car totally sideways in his bid for the win. L.J. held strong down low to grab his first-ever victory at the track in tremendous fashion. Jezylo’s great second place run locked down his first-ever championship. Ian’s son, Adam, won the 2017 B Main title. Jerry Farmer was third, Duffin fourth and Rich Abel fifth, with Anthony Camilli, rookie Gary Navarre, rookie Dillon Zalenski, Les Syring, Trevor Farmer and Aaron Greathouse next in line at the stripe. 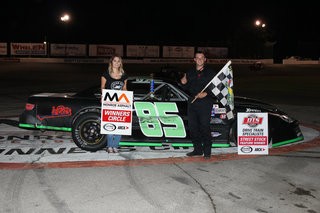 Hedges set the Fastime Racing Engines and Parts fast time for the 28 car field at 13:486. Greathouse led the B cars at 14:095. The top 20 in each group were locked into their respective classes for the championship night. Scott Selmi, Fire, Lange, Jezylo and Zalenski took the heat race wins.

Flat Rock Speedway takes a week off from action—there is no racing scheduled for August 25. The next event is the Dani’s Transport School Bus Figure 8 race Saturday, September 1. The event has a special start time of 6 p.m.

The Figure 8’s and Street Stocks will be part of the September 1 race card, using a no qualifying “progressive” format. Drivers will draw for heat race starting positions. Finishing positions in those heat races will determine the feature race lineups, which provides for great entertainment and action. The stock car portion of the night will be joined by flag pole races, the wild Boat Figure 8 race and the grand finale’, the School Bus Figure 8 race.

Tickets are now on sale for the event, both reserved and general admission. Reserved seats are $18 each regardless of age. General admission tickets are $17 for adults, ages 6-12 are $3 and under 6 are free. Please call the track at 734-782-2480 for tickets. The advance sale ENDS Friday, August 31 at 5 p.m.

The pit gates will open at 3:30, the front gates and ticket office open at 3:30, race car practice is at 4:30 and show time is 6 p.m. A rain date of Saturday, September 8 has been established if needed.

Congrats to grant hedges on your street stock championship, it was a great season watching you and ray battle it out every week.