A great field of 39 cars assembled for the biggest race of the season for the class. The TKC Go-Karts staged an exhibition race prior to the start of the show, and Mason Surgeoner brought out his Bandolero to run laps, as the track’s plans to build this class for the future continues. 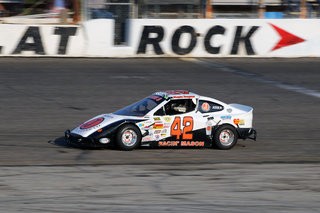 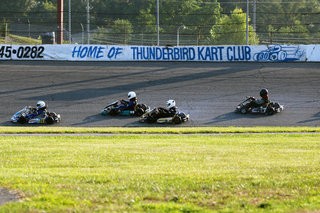 The first 34 laps of the 100 lap event ran caution-free. Metdepenningen, the pole car for the 20 car field via the 11 car inversion, ran strong out front. Single file racing was the name of the game early on, with the top 5 at lap 25 being Metdepenningen, Rob Moore Jr., Scott Selmi, Grant Hedges and Rob Moore Sr.

A pair of quick yellow flags before the half-way mark kept the field bunched and it was Selmi’s turn to battle Jeff for the top spot, and was credited with leading lap 38. Scott could pull up to the door of Jeff going into the corners, using the high groove, but Metdepenningen had enough speed to stay in front and took the point back on lap 39. At lap 50, it was Jeff, Selmi, Hedges, Greg Studt, Moore Sr., Guy Fire, Steve Searles, Scot Bunge, Kyle Worley and Ray Morneau Jr. in the top 10.

The 4th yellow of the night waved on lap 78 when Selmi looped his machine coming out of turn 4, erasing his great run to that point. Metdepenningen stayed in command on the restart, and now had Fire literally glued to his rear bumper. The duo played bump and run, but Jeff never wavered and stayed in the number 1 spot. Studt went up top and for the final 15 laps, worked that high groove, moving up to 2nd, falling back and then rolling right back into the battle for the win. With 2 to go, a lapped car almost really shuffled the deck, but Jeff got by, Studt sailed up top to take second and dropped Fire back to third. At the flag, Metdepenningen took the big win, with Studt, Fire, Hedges and Morneau Jr. rounding out the top five. Morneau fell back early and rolled along in the back part of the pack, making his move to the front in the final 25 circuits. Moore Sr. was sixth, Selmi charged back up to take seventh, Jeff Luttermoser was eighth, David Liaeff ninth and Searles tenth in the rundown. 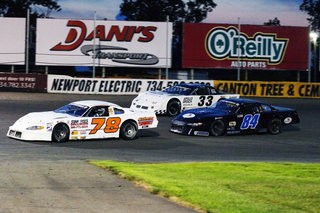 Current DTS Drive Train Specialists Street Stock B Main point leader Ian Jezylo avoided trouble, stayed in contention throughout and took the lead on a lap 25 restart on his way to the win in the 30 lap B Main contest. Aaron Greathouse led the first 25 laps, but tangled with Trevor Farmer on that lap 25 restart, sending him spinning into the infield, ending his great run. Jezylo now was the leader and held on despite a couple yellows in the final 5 tours to take his first win of the season. L.J. Farmer continued his strong rookie season with second, Troy Brehmer was third, Jerry Farmer (L.J.’s dad) fourth and Anthony Camilli was fifth, followed by Rich Abel, Chris Diovardi, Gary Navarre, Trevor Farmer and Wilburn Parks. 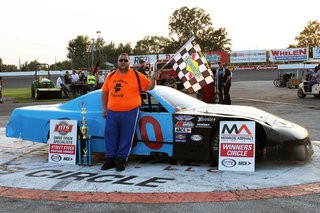 Fire posted the Fastime Racing Engines and Parts fast time at 13:602. Rob Randa had the quick time, but that was disallowed when he failed post-qualifying inspection. James Pankow led the B Cars with a lap of 14:093.

Jeremy Vanderhoof took advantage of a 3-car battle for the lead, which gave him the opportunity to close the gap, take the lead on lap 14 and go to victory in the 20 lap ARCA Victory Lane Quick Oil Change Figure 8 feature event. The 10 car invert put veteran Dave Lambert on the pole, with Dave leading the first lap, only to give way to his son, John, on lap 2. John’s brother, Ethen, closed in and battled his brother for the lead, as Fastime Racing Engines and Parts fast qualifier Jeremy Miller (21:328), who started 10th, whittled the gap and caught the lead duo, setting up the 3 car tussle. While the lead trio battled, it gave Vanderhoof his shot to knock down the lead gap, and, on lap 14, Vanderhoof zipped by on his way to the win. Miller took second, Billy Earley was third, John Lambert fourth and Ethen Lambert fifth, followed by Dennis Whisman Jr., Scott Apperson, Dave Lambert, Eugene Worden, Dennis Whisman and Travis Earley. Heat race winners were Billy Earley and Dave Lambert. 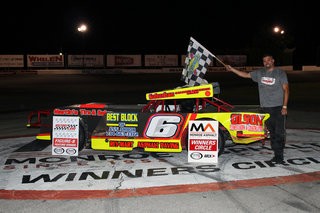 Saturday, August 11 Flat Rock Speedway will host UAW Local 3000 Kids Night! All kids to age 12 will be admitted FREE and receive a FREE hot dog, compliments of the track. Round number 4 of the 5-race Monroe News Enduro Series will hit the track for a 250 lap event, with action also slated for the Figure 8 and Street Stocks. The evening will be capped off with a wild Boat Figure 8 race!

The pit gates open at 3, practice begins at 4;30, time trials are set for 5:45 and racing begins at 7 p.m. ALL tickets go on sale race day at 4:30 when the ticket office and front gates open. Parents should pick up the children’s tickets at the ticket office upon arrival to the track Saturday. There is no advance sale for this event.

Aaron greathouse should have won that B-main if trevor didnt dump him, like he does everybody,  thats where i think that tap out rule should not be in effect the officials should see that and send the spinner to the rear.the guy that's getting spinned can't control what's behind him.

I agree with this. If it’s clear as day both drivers shouldn’t be punished just because one driver wants to be an ass and not admit fault to it. The officials should make some kind of a call at some point. Or if they don’t want to make calls then they should stay out of it after the race and let the drivers handle it.