Jim Froling, Jeff Metdepenningen and Wilburn Parks also notched victories on a perfect evening for racing at “The Rock”.

The 11-car inversion for the 40 lap contest saw rookie Joe Vanderhoof grab the lead for the first 2 laps. The red came out after the 1st circuit when Jeremy Vanderhoof tagged the wall and came to a stop. On the re-start, Dan Apperson zipped by Joe to take the point, with a bunch of contenders bunched behind the leader. Entering turn 3 of the Figure 8 track with 10 laps in, Dan looped his machine with a host of cars scattering to avoid problems. Dan did a 360 spin and got back into action, as Scott Apperson, Dan’s son, snuck under the pack to grab the lead. Billy Earley, who had made his way from 11th to 4th, went pit-side for assistance, dropping him from contention. For the next 30 laps, Scott, Whisman and Miller zipped in and out of lapped traffic. Scott picked the right gaps and openings to grab his big first win at Flat Rock, with Whisman, Miller, Dan Apperson and James Vanderhoof completing the top five. Gary Cronenwett, Ethen Lambert, Eugene Worden, Joey Vanderhoof, Travis Earley, Billy Earley, Mark Lavoie, Dennis Whisman Jr., Stephanie Bradley and Jeremy Vanderhoof were next in line at the finish. Billy Earley set the Fastime Racing Engines and Parts quick time at 20:925, with Scott Apperson and Lambert capturing the heat races.

The ARCA Aramark Late Model Sportsman cars made their first of 2 appearances at Flat Rock for the R & M Recycling 50 lap Silver Cup Series race. Mike Young took the lead on the start until Ron Allen got by to take the lead on lap 5. A trio of yellow flags slowed things early, but the final 39 laps ran straight through green flag. Allen had the company of Jim Froling for the next 25 laps, as Jim looked high and low to get around the leader. On lap 31, Froling pulled even with Ron and slid by using the outside lane to grab the point. Behind the leader, the battle was for second spot, as Howard Kelley Jr. and Tommy O’Leary IV both dove under Allen, who was fighting a tough-handling machine. At the finish it was Froling, Kelley Jr., O’Leary IV, Allen and Landon Schuster, followed by Young, Kyle Worley, Kent McCloskey, James Potter and Craig Osenbaugh. Chris Hebert had mechanical troubles and did not start the event. Froling set fast time at 13:295. 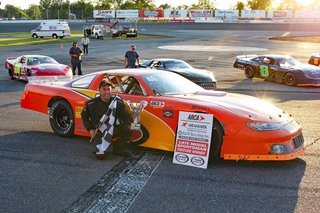 Just a few yellow flags slowed action in the 25 lap ARCA DTS Street Stock A Main contest. Jeff “Fireball” Metdenpenningen withstood several challenges for the lead on his way to his 2nd win of the season. Great pack racing kept things exciting the entire distance. Ray Morneau Jr. closed in as a lap 19 yellow bunched the field, keeping the pressure on Jeff. Ray looked to the low side as the finished neared, and then Kyle Worley snuck low under Ray to take second spot. Jeff was up to the task to claim the win over Worley, Morneau Jr., Grant Hedges, Greg Studt, Guy Fire, Rob Randa, Rob Moore Jr. (with his best run of the year), Clarity Patton and Scott Selmi. 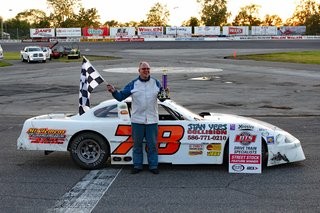 Current point leader Wilburn Parks snuck around the high side of Caleb Barron and Adam Jezylo in a great 3-car battle to take the win in the 15 lap DTS Drive Train Specialists Street Stock B Main. The trio broke away from the rest of the field and staged their own race, battling back and forth all the way to the checkered flag. Parks just edged Barron at the stripe, with Jeyzlo third. Chris Webber, Trevor Farmer, Leroy Farmer, Justin Rodriguez, Alan Kennedy and Jerry Farmer completed the finishing order. Greg Studt posted the Fastime Racing Engines and Parts fast time for the 28 car field at 13:560, while Parks led the B field at 14:257. Fire, David Liaeff, James Pankow, Jezylo and Jerry Farmer took the heat race wins. 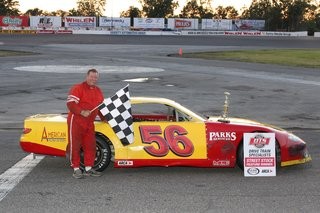 Saturday marked a unique milestone for the Farmer family, as patriarch Leroy Farmer returned to racing, with his son, Jerry, and grandson, Trevor, also in competition. Leroy picked up a Street Stock feature win back in the 1980’s as the 70-something driver made his return to the track!

A twist in Flat Rock’s schedule for next weekend will see no racing on Saturday, but a Sunday Night Special, July 2, is on the race schedule. The Monroe News 250 lap Enduro race, the MCR Dwarf Cars and the Bandoleros will be on hand for the pre-holiday event.

The pit gates open at 4, practice begins at 5, time trials are at 6:15 and show time is 7 p.m. ALL tickets go on sale race day at 5 p.m. There is no advance sale for this event. Fans can bring their ticket stubs from the June 24 race and receive $5 off admission to the July 2 event.

i wish these ridiculous street stock starts would be addressed, we are back to starting in the back stretch instead of the cone????