The 25 lap ARCA DTS Drive Train Specialists Street Stock A Main saw just 1 yellow flag and there was outstanding competition the entire distance.  Craig Lange motored into the lead on the green and held the point for the first 14 laps.  Greg Studt, in his first race in his new Street Stock ride, used the high groove and took the lead on lap 15.  Lange kept fighting back on the inside and a lap 16 yellow bunched the field.  Craig took off in the high groove on the re-start and reclaimed the lead, looking for his initial victory at Flat Rock.  Landon Schuster, coming from 8th spot, worked his way up to battle Studt and Kyle Worley.  Landon went up top and got by Kyle, and with 2 to go, Schuster got door to door with Lange.  The duo raced hard and clean as Schuster nosed out front just enough to capture the win on the high side.  Lange ran a superb race and took second, Tim Moore, who was in the thick of that battle up front, took third at the finish, with fourth to Studt and fifth was Scott Selmi.  Nick Shanks, Worley, Steve Chartrand, Rob Randa and Ray Morneau Jr. completed the top ten. 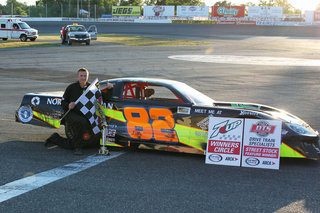 It was the first night behind the wheel for 14 year-old Robbie Moore in his dad’s (Rob) Street Stock.  Robbie became the third different leader in the 15 lap B Main and held on for the big victory.  Jeffrey Kurzyniec and Adam Jezylo both took turns leading the event until Moore grabbed the lead and the win. 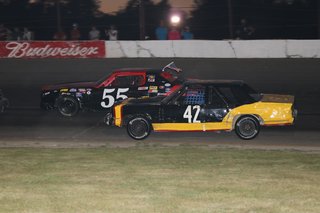 The Monroe News 250 lap Enduro contest saw just 1 red flag to stop the event.  Derrick Sheppard passed Rick Bennett just past the half-way mark and motored to the win.  Derrick’s car failed post-race inspection, as did 5th place Kyle Metdepenningen. The win will go to Troy Brehmer.  Brehmer got by Rick Bennett in the closing stages of the race.  Bennett will be awarded second, Robb Remick third, Jeff Braun fourth and fifth was Jacob Thomas. Ian Rumble, Nathan Sprotberry, Ed Case, David Rumble and Brad Turner completed the top ten finishers in the 25 car field.  Matt Ringger set fast time for the Enduro cars at 14:237, but got tangled up in a skirmish during the event and eventually called it a night with damage to his machine.  The 5th and final Monroe News 250 lap Enduro race of the season is set for Saturday night, September 12.

Saturday, August 8, race fans will get to see two Figure 8 features, plus the ARCA Moran Chevrolet Late Models and the ARCA Aramark Late Model Sportsman in 50 lap main events.  The ARCA Praxair Figure 8 class will run their feature event that was rained out from July 25, in addition to their scheduled 20 lap event.  The Late Models will run a complete program, capped off with their 50 lap feature, while the Late Model Sportsman will make their second visit to Flat Rock this year and will also compete in a 50 lap main event.

Just wanna take a min.and say how proud I am of my son robbie, I gave up my car for the night and he didnt let me down he is amazing in many ways, he is my hero.thanks for everyones overwhelming support on that emotional night.cant wait till next year.